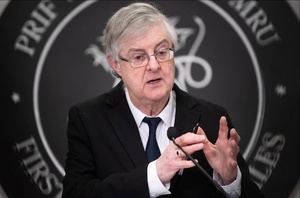 Welsh first minister Mark Drakeford today insisted he wouldn’t consider bringing in local curfews for men to make women feel safer on the streets at night – after suggesting they could be used in a “crisis”.

He clarified there is no intention of ever introducing a ban on men going out in the evening, just hours after leaving the door open to such “dramatic action” if necessary.

One Curfew Over The Cuckoo’s Nest