“You just do not get it. We are British, those three words.” – Gregory Campbell

Gregory Campbell, MP for the DUP on #CBLive discussing his views on whether a United Ireland is possible. pic.twitter.com/X2BFDCtUzn 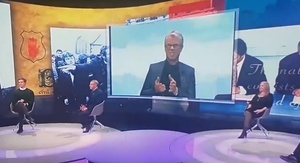 Even @JoeBrolly1993 harshest critics believe he was harshly and rudely treated by Claire Byrne last night📺 @ClaireByrneLive
Her approach in general needs far more consistency. Thus far not a mention of it on radio today on 📻 @TodaywithClaire .#cblive#TodayCB #joebrolly pic.twitter.com/qjLKBCW8MD

“You see them [the DUP] chuckling and guffawing when people are trying to have a serious discussion. Laughing at the Irish language, laughing at Gaelic sports, the homophobia, the racism, all these things.”

GAA pundit Joe Brolly before being yanked off air.

I was taken off air and told it was because RTE could not risk me saying the DUP were homophobic, racist or sectarian. I must apologise to the DUP at once. pic.twitter.com/9iZSSLC3gW

The Queen Of Ulster

23 thoughts on “‘Chuckling And Guffawing’”