RTÉ Investigates on Prime Time on RTÉ One.

Whistleblower Shane Corr (top) reveals how the Department of Health secretly used information from private doctor consultations to build and maintain dossiers on children with autism who were involved in legal actions against the State. 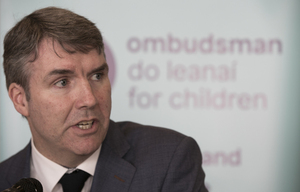 Children’s Ombudsman Niall Muldoon was asked if he wanted the practice stopped, he said: “Absolutely”.

“There’s a couple of questions need to happen, statements need to come out: Has this stopped? And also has the Department of Health made immediate contact with the families involved? Because there’s hundreds of families out there worried that they might be the ones involved here?

“They might be the ones who have had information gathered on them. So we need to make sure that those families know that they have this information available.

“And, finally, we want to take a look at see has this been happening in other lawsuits in which children are involved. Because, again, if you consider this to be normal, than I would very concerned about the culture that you’re working in.”

Later, asked what the impact of the revelations on the relationship between children involved and those providing care to them, he said:

“It’s got to be damaging. As you heard [HSE CEO] Paul Reid say there, earlier on, confidentiality is the cornerstone of all medical and therapeutic services. Our children with autism are going to these therapeutic services with the sense this is about them and them only and no information will be shared outwards.

“But to find that, if a child has a meltdown, or has some sort of challenging behaviour situation, that that is recorded for nobody to look at, not for a lawyer to use against them, that’s the absolute opposite of therapeutic service.

18 thoughts on ““If You Consider This Normal, I’d Be Very Concerned About The Culture You’re Working In””