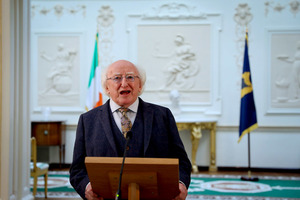 Our President Michael D. Higgins turns 80 this Sunday, and Ryan will sit down with him at Áras an Uachtaráin to discuss the President’s hopes for Ireland’s future.

Kathy Bates, the Academy Award-winning actress and star of Misery, Titanic, and PS I Love You, will tell how she is trying to perfect a Ballyfermot accent for her latest role.

Ireland rugby captain Johnny Sexton will be chatting about his chances of making the Lions team, the return of Simon Zebo to Munster, and lending his support to DEBRA Ireland. Claudia Scanlon, who has EB, will be joined by her mother Liz to speak to Ryan about living with the condition and thriving against the odds.

Singer Imelda May will give an exclusive performance of Don’t Let Me Stand on My Own, with Niall McNamee, from her new album 11 Past the Hour.

Plus, we have the debut TV performance of Crybaby from Noel Hogan featuring Bronagh Gallagher.