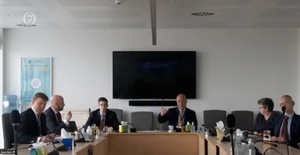 Committee chairperson Kieran O’Donnell says he is not suggesting antigen tests replace PCR tests. He suggests antigen tests could be used within an hour before going on a plane. | Live updates: https://t.co/4OK6Ul3DqJ pic.twitter.com/NtZF0KjGmj

Dr Tony Holohan says a recent study, in which people were tested with both PCR and antigen, showed just 52% of positive cases were picked up by rapid antigen tests in asymptomatic people. | Live updates: https://t.co/4OK6Ul3DqJ pic.twitter.com/sBvfw8EkZ4

Citing various studies, Chief Medical Officer Tony Holohan said the use of rapid antigen testing, as a means to give people the “green light” to engage in certain activities, could pose several risks.

It doesn’t matter what @CMOIreland says.
The EU has considered 4 possible instances for travelling:
– if you had the virus
– PCR test
– Antigen Test
– vaccine

He just CANNOT oppose this!!!!

Given the establishment of another task force on Shannon and the failure to implement previous reports on aviation and on #antigen testing, I asked the Taoiseach who’s running the country and for whose benefit. pic.twitter.com/LFZyxQntpa

The Dail at the Convention centre.

Not All Pubs Wear Capes

32 thoughts on “‘Who Is Running The Country And For Whose Benefit?’”