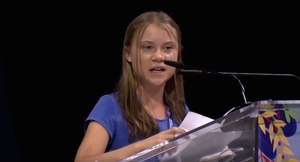 Greta Thunberg and fellow youth campaigners struck a sceptical tone for this week’s climate talks in Italy, saying much has been promised but little done to tackle global warming in almost three decades since the landmark Earth Summit.

On data centres, Minister @EamonRyan says they will live within the energy security needs and emissions targets. He says bans or moratoriums are not the way to proceed. @rtenews

Energy Minister @EamonRyan tells @morningireland that he can’t absolutely rule out blackouts this Winter but he believes the Govt can manage to avoid it. He says it will be difficult however @rtenews

75 thoughts on “The Blah Planet”