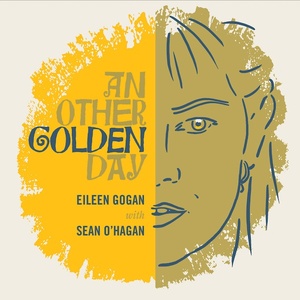 I’m getting Carole King vibes from this fruitful collaboration between Dublin songsmith Eileen Gogan (The Would Be’s, The Revenants, The Drays) and Sean O’Hagan (Microdisney, The High Llamas).

The 4-song EP Another Golden Day is released by Dimple Discs.

“Cathal Coughlan got in touch in 2018 to ask if I would sing with Microdisney on their reunion gigs and that is how I met Sean. Sean then got in touch a few months after the gig as he was interested in doing some shows around Ireland. He asked if I knew any good venues. He then suggested that I might support him, so Sean, Brian O’Neill (from Dimple Discs) and I went on the road in a rented car and played some gigs around Ireland. It was the best fun ever!

“Sean and I stayed in touch, and then he helped out on my solo album. Later I think he was between projects and looking for something to do and he asked me to send him some songs. He liked some of them and he thought it might be fun to release an EP. I am completely blown away by what he has done. Whenever I listen to them I’m mesmerised by the amazing breath and ethereal life he has injected into the songs.”

Nick says: May all your days be gold.