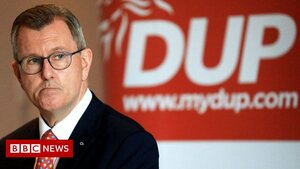 Fundamentally, powersharing can only be restored on the basis of consensus. That’s where we need to get to. @J_Donaldson_MP pic.twitter.com/yf1uY4zFLQ

“While this is a sad day for Northern Ireland, it is a shameful day for the DUP”

Alliance Party leader Naomi Long criticises members of the DUP for taking their salaries but refusing “to take their seats and do the work to earn it”https://t.co/YszI5SnB0x pic.twitter.com/Jj4keWhwRx