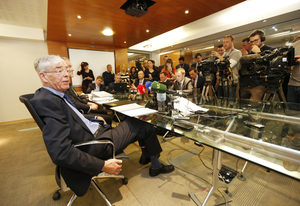 Alan Dukes, former Chairman of IBRC at a press briefing in relation to the Siteserv issue on April 23, 2015  at the offices of Eames Solicitors, Dublin 2

Further to the leak this morning of a final draft of the Siterserv legal review that reportedly asserts:

‘The bank made its decision to approve the sale of the Siteserv group to Denis O’Brien in good faith, but based on misleading and incomplete information provided to it by the company.’

The State incurred a loss of more than €100 million on the sale.

Siteserv shareholders were paid €5 million as part of the deal.

Throughout the sale process, criticism was usually angrily shut down.

Former IBRC chairman Alan Dukes said he is “extremely angry” the review of the Siteserv sale and other transactions conducted by the bank will seek evidence of criminality or malpractice.

The very fact that the possibility of criminality had been mentioned was “absolutely outrageous”, he told a press conference in Dublin.

Mr Dukes said he does not know the precise list of transactions to be covered under the Government-commissioned IBRC review into transations worth more than €10 million, but that he was “happy” the review is taking place.

However, he said he is “scandalised”at the notion of the review seeking evidence of malpractice by IBRC, a State-owned bank set up to wind down the assets of Anglo Irish Bank and Irish Nationwide.

There were “no grounds for suggesting that”, he told the press conference .

Some people, he said, saw “conspiracy in their tea leaves”, adding he wished to say “in the strongest possible terms” that any such allegations were out of place.

He said he tried not be paranoid, adding that did not mean “they’re not out to get you”, to laughter from many of those present…. 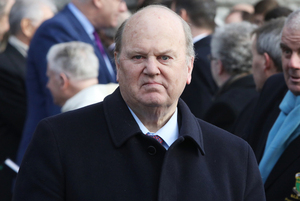 [Alan Dukes] assured me that what happened was in the best interests of the State and consequently of the taxpayer”.

“The deal was the deal and I was assured the components of the deal were necessary to get the best results for the taxpayer. All transactions were complete. There was no possibility of a reversal and I trusted Alan Dukes.”

The Bank That Liked To Say Yes