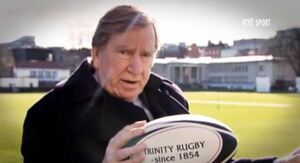 Ahead of today’s 6 Nations Championship game between England and Ireland at Twickenham, Tom McGurk gives us a history lesson.

“It was here in College Park that the oval football was first kicked through the 19th century Irish twilight. Trinity College founded in 1854 is the oldest surviving working club in the world. This was the birthplace of Irish rugby football. So, once again, this evening, the red rose and shamrocks will square up.”

The strange odour of age?