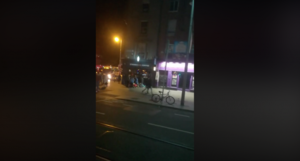 Tom Duffy, a volunteer from Feed Our Homeless, recorded a live Facebook video claiming a woman in her 70s was sleeping outside Starbuck’s and that her son, in his late 30s or early 40s, was “wrapping her up like a baby” for the night.

In the video, Tom said:

“There’s a man, in his, I’d say, mid to late-30s, and he is now, at the moment, wrapping his 74-year-old mother in sleeping bags. And thank God, we had one sleeping bag left. We gave them an extra sleeping bag.

Gardaí in a Cortina on O’Connell Street, Dublin, in the mid 1980s.