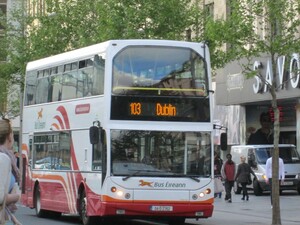 On the bus home, Aisling has her handbag under the seat. The lad behind her takes her wallet out of it, and heads down the stairs to get off at the next stop.

Someone alerts Aisling, and she runs down the stairs after the lad, but by then he’s already briskly walking off down the road as the bus pulls away.

The lad probably thinks he’s getting away with it.

What he doesn’t know is that our bus driver is the maddest of Mad Toms: even on good days his eyes tend to work independently.

Sure enough, the bus stops, the doors burst open and out flies Tom. Even though I’m on the top deck, I can still see that Tom’s head is fully fire engine red with the rage.

He’s not having a bit of it.

The lad is a whippet with a headstart. Our Tom is shaped more like a breakfast roll with arms and legs. And yet, he’s still gaining on him with every stride.

The lad – accepting he is beaten, and probably close to emptying his bowels at the sight of Mad Tom steaming towards him – stops, turns, and lobs the wallet high over Tom’s head, which is how he gets to live to rob another day.

When Tom gets back to the bus, he hands the wallet back to a delighted Aisling, and a much-deserved round of applause breaks out.

Later, when I get off at my stop, instead of the usual “thanks”, I say “well done”, but all Tom says is “twas no bother”, as if running down pickpockets like a Mad Tom Terminator T1000 is just something he does from time to time, for the craic.

And it probably is.

*That happened one evening back in 2010, just before I got made redundant. I’m back on the buses this year and there’s no sign of Tom on the route (Bus Eireann route: Dublin – Ashbourne, 103) but if he’s still driving buses, I’d give him all the raises that he wants.