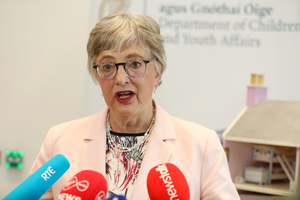 Minister for Children Katherine Zappone; clip from RTE Investigates: Creches – Behind Closed Doors which was broadcast on July 24 last

On Wednesday, July 24 last, RTÉ’s Investigates broadcast a report about the standards of care at the Hyde & Seek Childcare company.

The report, called Creches – Behind Closed Doors, exposed failings in the standard of care provided to children in a number of the company’s branches across Dublin.

A Garda investigation into some issues raised in the report was launched after the broadcast.

Aoife Hegarty, of RTÉ, reports today that concerns about the company were raised with the Minister for Children Katherine Zappone more than a year ago.

Correspondence obtained by Fianna Fáil TD Anne Rabbitte shows Minister Zappone received a copy of a complaint forwarded to the Child & Family Agency TUSLA from a parent regarding the Hyde & Seek crèche at Glasnevin on Dublin’s northside.

The new purpose-built facility operated for 14 months without registration.

…The complaint from the parent, which detailed a series of issues with child-to-staff ratios and other safety concerns, was first shared with Minister for Finance Paschal Donohue, who subsequently forwarded it to Minister Zappone.

Minister Zappone acknowledged the crèche was not registered with TUSLA, but said it would be inappropriate for her to interfere in the agency’s ongoing investigations.

Zappone alerted to concerns at Hyde & Seek Childcare more than a year ago (Aoife Hegarty, RTE)

Watch the RTE Prime Time investigation back in full here

Yesterday: Misleading Survivors And The Dáil

A day after the RTE Investigates documentary was broadcast…

My child was in the creche in #RTEInvestigates in 2009. I took him out & complained to HSE about treatment of children. Yet creche continued. Im not shocked by #creches scandal. It will continue until weve a govt that really cares for children, funds & enforces quality childcare