“I have previously relayed my commitment to the House to inviting the UN special rapporteur on the promotion of truth, justice, reparation and guarantees of non-recurrence, Mr. Pablo de Greiff, to come to Ireland.

I believe he can assist us in our endeavours to establish the truth and advise us on how best to move forward and deal with this part of our history.

Arrangements are at an advanced stage and I expect an invitation to be issued to Mr. de Greiff in the coming days.” 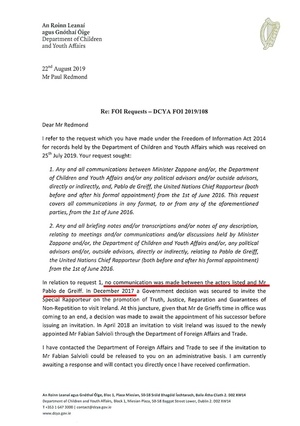 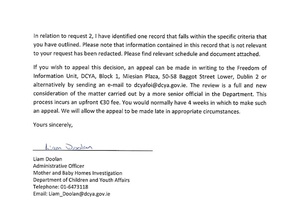 Via The Coalition of Mother And Baby home Survivors (CMABS):

An Administrative Officer in the Department of Children and Youth Affairs (DCYA) has flatly contradicted statements made by Minister Katherine Zappone in the Dáil that arrangements to invite the UN Special Rapporteur for the promotion of truth, justice, reparation and guarantee of non-recurrence to Ireland, were at an “advanced stage” and later that she was “… working with my colleague the Tánaiste and Minister for Foreign Affairs and Trade to arrange this invitation.”

In response to a Freedom of Information request, Liam Doolan of the Mother and Baby homes investigation, replied that:

“…no communication was made between the actors listed [Katherine Zappone and the Dept of CYA] and Mr. Pablo de Greiff”.

Doolan’s letter completely undermines the clear statement that Minister Zappone made in the Dáil on February 13,  2018

The Freedom of Information request also revealed that no invitation was ever issued to Pablo de Greiff despite Minister Zappone making repeated references to such an invitation for several months from as early as the beginning of June 2017 until as late as February 13, 2018. On 24.Jan.2018, Minister Zappone in a written answer in the Dáil informed Denise Mitchell TD that:

“…In addition, the Government has agreed to invite Mr. Pablo de Greiff, UN Special Rapporteur, to assist Ireland in our response to issues related to former Mother and Baby homes and I am working with my colleague the Tánaiste and Minister for Foreign Affairs and Trade to arrange this invitation”

15 thoughts on “Misleading Survivors And The Dáil”