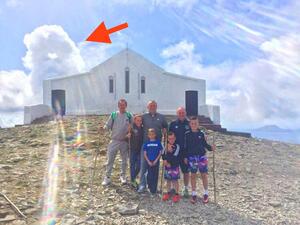 From left: Liam and Roy Fox with kids and brother-in-law Thomas Morgan

They posed for a quick group shot outside St Patrick’s Chapel at the summit, before making their descent.

But when they inspected the snaps later, they saw what appeared to be the face of Our Lord in the clouds.

And they say a Bible passage actually prophesied the apparition.

Incredibly, the picture was taken at exactly 15.49 — which in the book of Corinthians refers to “the image of the heavenly man”.