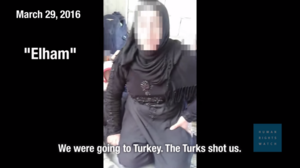 You may recall how last month, The Times reported how eight Syrians were shot at the Syrian-Turkey border by Turkish border police.

During March and April 2016, Turkish border guards used violence against Syrian asylum seekers and smugglers, killing five people, including a child, and seriously injuring 14 others, according to victims, witnesses, and Syrian locals interviewed by Human Rights Watch. Turkey’s Foreign Affairs Ministry maintains the country has an “open-door policy” for Syrian refugees, despite building a new border wall.

…The hostilities continue to threaten Syrians already displaced by fighting. According to witnesses, at around 5 p.m. on May 5, three airstrikes hit the Kamuna camp sheltering 4,500 displaced Syrians near Sarmada in northern Idlib province, five kilometers from Turkey’s increasingly impenetrable border.

An independent humanitarian source in Turkey told Human Rights Watch that medics recovered 20 bodies, including two children, and that at least 37 people were injured, including 10 who lost one or more limbs and who were transferred to Turkey for medical care.

…Human Rights Watch interviewed victims and witnesses involved in seven incidents between the first week of March and April 17, in which Turkish border guards shot dead three asylum seekers (one man, one woman, and a 15-year-old boy) and one smuggler; beat to death one smuggler; shot and injured eight asylum seekers, including three children, aged 3, 5, and 9; and severely assaulted six asylum seekers.

Syrians living near the border also described the aftermaths of the shootings and beatings, including Turkish border guards firing at them as they tried to recover bodies at the border wall. One witness filmed a number of the dead and surviving victims and shared the videos with Human Rights Watch.

…As of early April, Turkey had completed a third of its 911-kilometer rocket-resistant concrete wall along its border with Syria and was working to fortify the rest of its border.

Turkey is entitled to secure its border with Syria, but is obliged to respect the principle of non-refoulement, which prohibits rejecting asylum seekers at borders when that would expose them to the threat of persecution, torture, and threats to life and freedom.

Turkey is also obliged to respect international norms on use of lethal force as well as the rights to life and bodily integrity, including the absolute prohibition on subjecting anyone to inhuman and degrading treatment.

…The violence against Syrian refugees, and Turkey’s refusal to allow them to cross the border, comes as the European Union has shut its own borders to asylum seekers.

In March, the EU concluded a controversial migration deal with Ankara to curb refugee and migration flows to Europe, committing €6 billion in aid to assist Syrians in Turkey, reinvigorating Turkey’s EU membership negotiations, and offering the prospect of visa-free travel for Turkish citizens.

The deal provides for Europe to return migrants, asylum seekers, and refugees, including Syrians, who reach Greece by boat, on the grounds that Turkey is a safe country for them.

The deal also commits the EU to work with Turkey to create areas inside Syria that will be “more safe.”

“The EU shouldn’t just stand by and watch as Turkey uses live ammunition and rifle butts to stem the refugee flow,” said Simpson. “EU officials should recognize that their red light for refugees to enter the EU gives Turkey a green light to close its border, exacting a heavy price on war-ravaged asylum seekers with nowhere else to go.”

Hundreds of non-Syrian asylum seekers deported under the EU-Turkey migration deal were not allowed to claim asylum in either Greece or Turkey, a group of European politicians has claimed.

After interviewing 40 of the deportees, the three MEPs have concluded that, despite EU promises, the deal with Turkey is not being enacted according to international law.

“All refugees interviewed told us they were not given the opportunity to ask for asylum, neither in Greece nor in Turkey,” Cornelia Ernst, Marina Albiol and Josu Juaristi said in a report released to journalists after they visited two detention centres in northern Turkey. “All said they did not know what will happen to them, and had received no information since they had arrived in Turkey.”

The trio are the first independent observers to corroborate the UN refugee agency’s earlier claims that some of the refugees were sent back to Turkey by mistake.