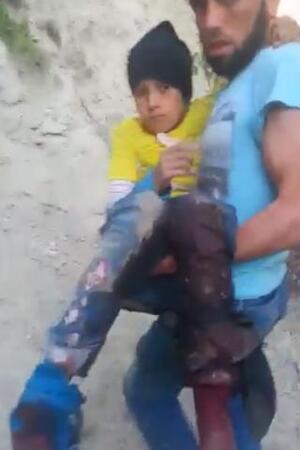 From top: A still from mobile phone footage obtained by The Times of a Syrian man carrying his son, who was shot in both legs, by Turkish border police; Bono with Turkey’s Prime Minister Ahmet Davutoğlu

You may recall reports in The Times yesterday detailing how eight Syrians were shot at the Syrian-Turkey border by Turkish border police, as they attempted to reach Turkey on Sunday.

Abdmunem Kashkash, a lawyer from Aleppo who was with the group but managed to cross into Turkey unharmed, said that they had been waiting in the border area for several days while trying to cross and had come under fire from the Turks every day.

“They are killing unarmed people,” Mr Kashkash said. “There was one little girl who was shot and we could not do more for her for four hours, until nightfall. An old man and woman are missing — they have probably been killed too.”

The wounded have been taken to a hospital in Azaz, a rebel-held Syrian town next to the Turkish border that is sheltering 100,000 displaced people who have fled the regime and Isis advances since February. Isis is closing in on the town from the east, but despite calls from aid agencies the Turkish government is refusing to open the border gate.

Readers may also recall how earlier this month – before the deportations from Greece to Turkey began on April 4 – Bono and a delegation of US senators and congressmen visited a Syrian refugee camp in Gaziantep province, in southeast Turkey.

“I am very humbled by the generosity of the Turkish people. It is extraordinary. It is a lesson in grace.”

Bono’s comments came just a week after Amnesty International reported that, hours after the EU-Turkey deal on Friday, March 18, Turkey forcibly returned around 30 Afghan asylum seekers to Afghanistan – without giving them the opportunity to seek asylum.

Bono’s concern for the plight of refugees, while undoubtedly genuine, would be more credible if he weren’t simultaneously offering cover to European leaders who deny asylum-seekers their basic legal rights.

Recently Turkey was rightly criticized for taking payments to accept refugees who should have been in the hands of the EU asylum system.

The same week, Bono was photographed with Turkish prime minister Ahmet Davutoglu, and called the Turkish role “a lesson in grace,” even while Amnesty International was accusing Turkey of forcing other refugees back into Syria.

It’s getting to be a habit with Bono, who warmly embraced George W. Bush and Tony Blair while they waged an illegal, immoral war on Iraq.

Bono has quite a voice: what a shame he so often uses it to sing the praises of powerful, disingenuous leaders.

Harry Browne is a lecturer at the School of Media, Dublin Institute of Technology and is the author of The Frontman: Bono (In the Name of Power)