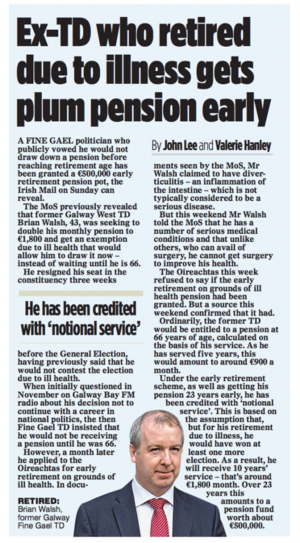 The Irish Mail on Sunday at the weekend

You may recall a post from yesterday about Fine Gael’s Brian Walsh.

It explained that, if the former TD’s application for early retirement – on grounds of ill health – was granted, he could start to receive his pension now, instead of waiting until he is 66.

This is despite Mr Walsh, who didn’t contest the general election, previously promising that he wouldn’t draw down the pension before he reached 66.

The Irish Mail on Sunday reported at the weekend that Mr Walsh has already been granted permission.

The Oireachtas this week refused to say if the early retirement on grounds of ill health pension had been granted. But a source this weekend confirmed that it had.

Ordinarily, the former TD would be entitled to a pension at 66 years of age, calculated on the basis of his service. As he has served five years, this would amount to around €900 a month.

Under the early retirement scheme, as well as getting his pension 23 years early, he has been credited with ‘notional service’. This is based on the assumption that, but for his retirement due to illness, he would have won at least one more election. As a result, he will receive 10 years’ service – that’s around €1,800 month. Over 23 years this amounts to a pension fund worth about €500,000. 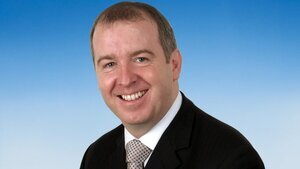 TD Brian Walsh has resigned due to illness. Deputy Walsh is a TD for Galway West and a former Galway City mayor. More follows.