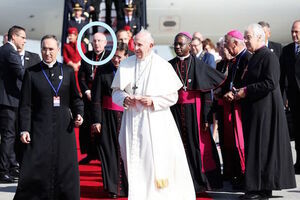 Irish media has been quiet about the fact that one of the people to greet the Pope off the plane was Cardinal Emeritus Séan Brady, who covered up the initial allegations of child abuse against Fr Brendan Smyth – who would go on to abuse again and again for twenty years. pic.twitter.com/b9bKtCCus9

Full transcript of Papal press conference on the plane back to Rome following #popeinireland: https://t.co/yU5dtabO18 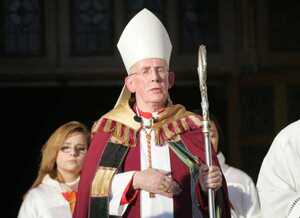 Last November, after a 14-year battle, Brendan Boland reached a settlement with the Archdiocese of Armagh represented by Cardinal Seán Brady.

After the payout, Mr Boland said:

“At the trial of Fr  [Brendan] Smyth, I met other victims who were 10-15 years younger than I, who would not have been abused if the assurances given to me and my family and the youth club priest had been honoured. This unkept promise was indeed a further abuse of me.

“These proceedings have been a considerable ordeal for me and have been strenuously defended by the cardinal.

“I hope that the Catholic Church will learn to show true compassion for all victims of clerical sexual abuse and withdraw all technical legal defence obstacles and ploys and make just offers of compensation where appropriate.

Yesterday Justine McCarthy wrote in her Sunday Times column: “..(Last Friday) a spokesman for Brady told this newspaper the cardinal intends to defend the legal cases now being brought against him by three of the children Boland told him about in 1975.”