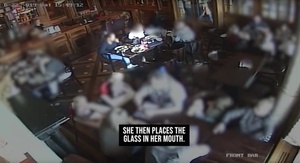 CCTV footage (via the Vintners Federation of Ireland) from Judge Roy Beans, Newbridge, County Kildare on June 22 shows a person taking a shard of glass from beneath her top then placing it in her mouth before pretending to choke.

“Sadly, this is typical of what I and many other publicans face on a weekly basis. It’s clear from the footage that after hiding glass in her clothes this person then deliberately places it in her mouth. She told a member of staff the glass was in her food, which was obviously not the case.” The Cinnamon Challenge – a now ubiquitous internet viral where people attempt (and fail spectacularly) to swallow a neat dessertspoonful of ground cinnamon is not only scientifically unwinnable, but dangerous.

It’s all down to lubrication, or rather, the lack of it. Jason Bittel  sez:

The spice that magically transforms dough and sugar into a sticky bun is actually ground up tree bark, which means we’re talking about a lot of water-resistant cellulose. And according to retired physical chemist Vince Calder, the rest is “a mixture of volatile organic compounds, a major component being cinnamanaldehyde, which is not very water soluble.”

If you want to see this in action without risking asphyxiation, put a tablespoon of cinnamon in a bowl and jostle it until the powder is level. Using a straw, allow a drop of water to fall on the surface. Instead of saturating the cinnamon – like it would with sugar – the water just beads up and rolls around like the liquid seed of a rusty T1000.