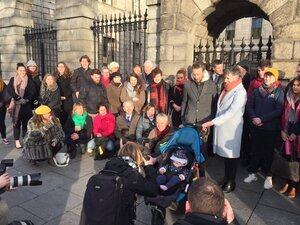 Outside the High Court.

Members and supporters of Friends of the Irish Environment gather ahead of the group taking a case against the State.

The group is asking the High Court to quash the Government’s National Mitigation Plan arguing that the Government’s approval of the plan in 2017 was in violation of Ireland’s Climate Action and Low Carbon Development Act 2015 (the Climate Act 2015), the Constitution and human rights obligations.

The group also claims that the plan falls far short of the steps required by the Paris Agreement on climate change.

Read more about the case here