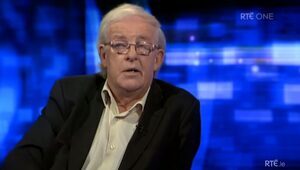 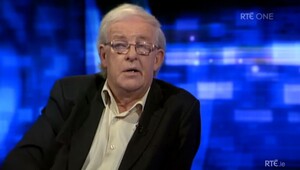 Further to the publication of the government’s Construction 2020 plan for the building industry and the possibility of state support for first time buyers economist Colm McCarthy appeared on Prime Time last night with David McCullough.

David McCullough: “Colm McCarthy, there’s a lot in this document, but just to deal with one item in it first, this idea of a mortgage guarantee – a lot of media attention on it, it seems to be thing that’s been picked out – helping young people get on the property ladder, surely that’s a good thing?”

Colm McCarthy: “Ah well, we tried it, and it wasn’t. One of the biggest mistakes we made, and we made lots of them last time around, was to create an expectation that you could buy a house with no money down. And the suggestion that the Minister for Finance made the other day – it’s not actually in the document, but he made it in his speech – he complained that it was unreasonable that people should have to have 20% as a deposit and suggested there would be 95% available, so they would only need a 5% deposit. If we hadn’t made that same mistake so recently, you could forgive it, but it is really dangerous to be pumping up what is a very regional property bubble . The idea that Ireland is back into a property bubble – if you spend any time anywhere outside the M50, and I do – you do not believe that. There are parts of the country, towns and villages, parts of the Midlands, 50 or 60 miles from Dublin that are disfigured with abandoned and vandalised ghost estates.”

McCullough: “Sure, but if the idea is that a couple can maybe come with 10% of the purchase price, the bank is willing to lend them 80% as a mortgage, you know, bridging that little gap may make a big difference for them?”

McCarthy: “That’s the problem, and the confusion of supply with demand is a pretty fundamental confusion. There is currently a problem in Dublin, a little bit in the provincial cities, but not that much – it’s mostly in Dublin. There is a demand for three and four bedroom houses – it’ll be there for a while, the demographic suggests that it won’t actually last forever, but that’s another day’s work – the average house size is still declining in the longer term. The solution to that problem is to build more three and four bedroom houses.
A lot of people find this difficult to believe, but until about 1975, the price of a house in Dublin and the price of house in the rest of the country was about the same. And people have got so used to this idea that housing must be much dearer in Dublin than elsewhere – it’s a relatively recent thing. It started with the 90’s Free Planning Act and nimbyism and,  ‘We don’t want any more houses around here’. The result is that Dublin is one of the lowest density cities in Western Europe – there is undeveloped land all over the place. The problem is a supply problem – and if the Government wants to put a stop to this incipient house price bubble in Dublin and the way to do it is to build more houses in Dublin.” 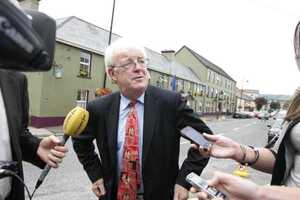 Economist Colm McCarthy spoke with Myles Dungan on Today with Pat Kenny on RTE R1 earlier in relation to this morning’s Anglo tapes story in the Irish Independent.

Things have certainly moved up a gear, in fairness like.

Colm McCarthy: “It’s remarkable that almost five years on, from these events now we still haven’t had a proper inquiry.

Myles Dungan: “And should this material now form the basis of an inquiry by the BAC for example?”

McCarthy: ‘Well there was a referendum run and lost by the Government about 18 months ago which would have re-empowered parliamentary committees to conduct proper inquiries. There powers had been circumscribed by the Abbeylara judgement as you may recall, it was about something completely different, but the courts decided that there were limits to the power of parliamentary inquiries. Limits that do not apply to parliaments in other countries, I might add. And the Government ran a referendum to restore those powers and they were kind of ambushed at the end of a poor campaign by a group of barristers and the referendum was narrowly defeated. There’s a very interesting piece on page 25 of today’s (Irish) Independent by John Downing , one of their regular columnists, in which he makes the point that it might be best now to actually rerun that  referendum and win it this time.”

Dungan: Talk to us a little bit about the mentality of those involved in this conversation, because the tone is very strange. I was suggesting to Fionnan Sheahan this morning that it does not appear that those involved felt particularly stressed by the circumstances or by the enormity of the situation that faced their institution?”

McCarthy: “Well, you know banks, when they begin to face a run on liquidity,  react in a manner which says ‘let’s, let’s find the fingers to stick in the dyke’ and that might be the finger of the Central Bank and that comes across a bit from the tapes. It’s worth recalling that for a couple of months after the guarantee, I mean these tapes relate to the middle of September, the guarantee was at the end of September 2008, but for a month or two after that, public officials were still pretending that the Irish banks were sound, that they had adequate capital buffers and so on. And, one of the implications of today’s revelations is that they may have been better informed than that.”

Dungan: “Now this conversation took place just a couple of days after Lehman Brothers had been allowed to collapse. A huge institution.”

Dungan: “It had been allowed to collapse by the US Government. The Anglo officials didn’t seem to think that that was going to happen in their case or they didn’t seem to be concerned.”

McCarthy: “Well I’m sure they must have been concerned but at that stage the Irish Government had not prepared bank resolution legislation and they had ample time to have done that because Northern Rock, in the United Kingdom, got into trouble 12 months earlier. The Bear Stearns bank in  New York had been rescued by  the Federal Government in March of 2008. The Feds obviously decided they’d had enough of that and they decided to let Lehman’s go. So one of the unexplained mysteries of the whole affair is why the Irish Government had not equipped itself for some broader options by the time the decision was taken to guarantee all its liabilities, or virtually all its liabilities of the Irish banking system.”

Dungan: “Would you agree that one of the other things that comes across from this transcript is that there was scant respect in Anglo Irish Bank for the Financial Regulator?”

McCarthy: “It has that air to it but I, I don’t think one should draw broad conclusions like that until there’s been a full inquiry. What this shows to me again is that journalists have written books about Anglo, they’ve written books about Irish Nationwide, it has been left to journalists to try and dig up as much as they can about what really happened. Nobody who was directly involved is saying anything, they’re all getting advice from lawyers, and so on. This is a classic example of a situation that needs a well-resourced, patient public inquiry and inquiries of that kind have been conducted and long since completed in various other jurisdictions.”

Dungan: “But this underscores the need for a properly constructed inquiry in this jurisdiction?”

McCarthy: “Yes, and it needs to be properly resourced. And if it requires a rerun of the referendum that was rather carelessly lost by the Government then so be it. But the public I think must now begin to realise that the country has been bankrupted and we still don’t really know why.”