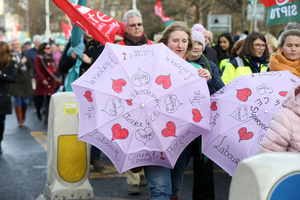 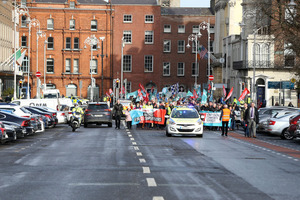 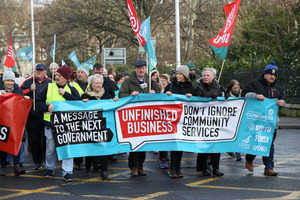 A march from the Custom House to the Department of Finance by Community Employment (CE) Supervisors and their supporters over pensions.

A total of 1,200 CE scheme supervisors have been overseeing 900 state funded services for almost 30 years but do not count as public sector workers. 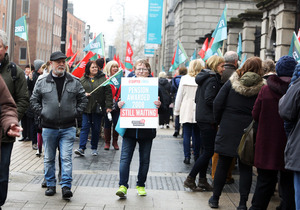 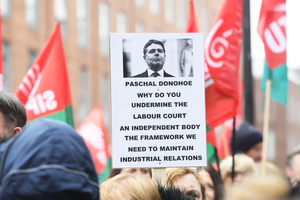 From top: scenes from a protest yesterday outside Leinster House by Supervisors and Assistant Supervisors of Community Employment (CE) schemes ; Bethany Langham

In 2008, the Labour Court in Ireland recommended that it is the responsibility of the Government to provide pensions for the Supervisors and Assistant Supervisors of Community Employment (CE) schemes in Ireland.

Eleven years later, the Government continues to ignore this ruling on the basis that they are not the employers of CE Supervisors.

CE schemes are designed to help those in long-term unemployment gain the confidence and skills necessary to re-enter the workforce.

There are approximately 22,500 participants on 1250 CE schemes in different communities around the country each with a Supervisor who takes care of the day-to-day management of the scheme.

In some cases where there are more than 26 participants on a scheme, there may be an Assistant Supervisor as well. Each CE scheme has a sponsor or multiple sponsor groups who help to oversee the scheme on a voluntary basis.

The Department of Employment Affairs and Social Protection (DEASP) oversees CE schemes. They provide financial support (including supervisors’ wages and employer PRSI) and have final say on the approval of new schemes.

The Government is the sole funder of these schemes and these subsidiary companies are essentially used as an extra layer of bank accounts.

Conor Mahon, who is a CE Supervisor in County Galway, describes the DEASP as his “shadow employer”.

He says the DEASP dictate…

“…how much holidays we get, how much sick leave we get… we’re audited by them. Every aspect of [CE] is micromanaged at every level”.

According to Mr. Mahon, even a small donation made by a member of the community who values the work of CE, results in a “hoopla with the department questioning it [demanding a] letter of explanation”.

Ahead of a planned strike in February 2019, a letter was sent to the sponsors of each scheme from Nora Durcan, Principle Officer in the DEASP.

In this letter, Ms. Durcan instructed how the sponsors should manage the schemes during the strike, reminding them that the DEASP will review funding allocated for the scheme “having regard to the industrial action taken”.

At a Dáil debate on January 29, 2019, Taoiseach Leo Varadkar claimed:

“It would be very unusual for a Government to reject a Labour Court recommendation… I am not sure I have ever seen Government bodies doing it”.

He also referred to a Private Members’ Bill from 2018 which received a two thirds majority to implement this LCR.

“In that case, the State is not the employer… but instead funds, or is the major funder of the body that employs the people.”

The Government’s stance on this matter is that the employer of the CE Supervisors should make provisions for a pension for them. Yet, the DEASP pays employer PRSI for CE Supervisors and Assistant Supervisors.

The Taoiseach is also manipulating the facts.

The subsidiary companies who govern each CE scheme are solely funded by the Government. Unless the Government makes provisions for extra funding for pension schemes, this matter will remain unresolved.

Minister for Public Expenditure, Paschal Donohoe, expressed his admiration for the Labour Court at a Dáil debate in March 2017.

He claimed that the Labour Court and Workplace Relations Commission handle thousands of issues each year and consequently “In order to ensure their continued role in matters of deep importance, it is crucial that the Government supports them”.

His opinion seems to differ in this case. Minister Donohoe claims that if the Government was to honour LCR 19293, the incurred costs due to other groups requesting the same rights, would be in the region of €400 million.

According to Mr Mahon, this scoping document includes…

“…every person or entity that gets funding from the Government [or] that does something beneficial for the community.”

“We have the LCR that none of the rest of them have”. These scare-tactics of Minister Donohoe are based on ‘the worst-case risk scenario’.”

In 2008 when CE schemes were governed by FÁS, a statutory body, €10 million was set aside to fund the provision of a pension scheme for CE Supervisors and Assistant Supervisors.

With the economic downturn, it was agreed on their behalf that this money would be rerouted into other areas of the country that needed the funds more urgently at the time. Since then, a change in Government saw that this money was never returned.

In 2015, Brendan Howlin, the then Minister for Public Expenditure and Reform, agreed to negotiate on this issue. However, according to Eddie Mullins, the SIPTU Sector Organiser for this case, “this [current] Government has basically back-tracked on it”.

When asked if he had ever seen the Government treat a group of people the way they are treating CE Supervisors and Assistant Supervisors, he said:

“No, it’s most unusual that they would treat a Labour Court recommendation the way they’re treating it”.

He regards the behaviour of the Government as “absolutely despicable” .

In 2015, at the Lansdowne Road Agreement, it was agreed that a High-Level Forum would be set up to deal with this issue.

On April 24, 2018, three years later, a Dáil debate was held on the subject of CE pension schemes during which Deputy Willie O’Dea of Fianna Fáil described the Forum:

On that day, CE Supervisors and Assistant Supervisors from around the country made their way to Dublin for the debate which proved to be a further display of indifference by Government.

As stated by Deputy O’Dea:

“these people have been insulted by the Government tonight… because the Ministers responsible, in particular the Minister for Employment Affairs and Social Protection, did not have the gumption to come in here and read out the miserable script… for not providing them with their justified claim”

Economically, CE Supervisors are suffering. Equal to this is the emotional drain as a result of fighting for their rights and being ignored by the Government for so many years.

Celia Killeney has been a CE Supervisor in Galway for 21 years.Despite being on the same wage for the last 11 years, due to inflation and the rising costs of living, Celia claims she is financially worse-off than she was in 2008.

When asked how being ignored and used by the State has made her feel, she replied “devalued, worthless” and that she feels “it is absolutely disgraceful for a human being to be treated like this”.

At a press briefing before the rally, it was announced that CE Supervisors and Assistant Supervisors will engage in five consecutive days of industrial action commencing on the 13th of May 2019.

Bethany Langham is a Galway-born, Dublin-based video and broadcast producer. She is currently doing a part-time masters in journalism and media communications.