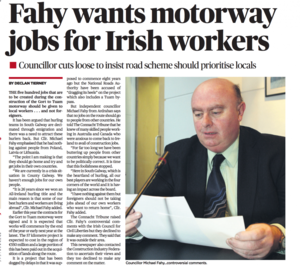 A County Galway vintners’ chief and County Councillor has advocated a review of the drink driving legislation which would allow customers to drink two or three pints and drive home safely. The publican said that it was up to the individuals concerned but he felt happy that some people could drive home safely with three pints on them and that there were those that couldn’t. But Timmy Broderick said that there was no way a person should lose their job or their livelihood if they were caught and prosecuted for drinking and driving.

“The legislation with regard to drink driving has to be changed if pubs are to survive. At the moment the owners of rural pubs cannot make a living and they are opening at times that is reflective of the trade that they do. It might cost a couple to come out on a night and possibly spend €60 between them on a few drinks and a taxi home but it is a lot safer than having a couple of bottles of whiskey which they could get for the same amount,” Timmy Broderick added.