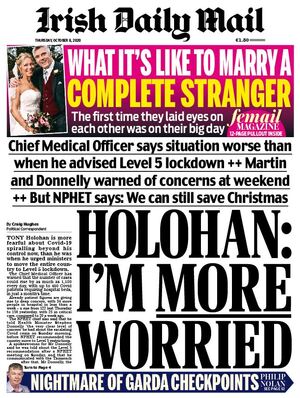 The Irish Daily Mail and the UK Daily Mail clash on the merits of further rona restrictions in the UK and Ireland. From top: Barry Cummins outlining details from the Graham Dwyer trial to David McCullagh on Prime Time last night and (above) Senator Marie Louise O’Donnell with Aoife Barry, from Journal.ie and Gavin Reilly, from Today FM, on Tonight With Vincent Browne last night

Are the salacious details of this ongoing criminal trial the new standard that RTE aspire to? #rtept

And the major public interest matter at the heart of this particular murder trial is? #rtept — Mark Brennock (@MarkBrennock) January 22, 2015

#vinb Says a lot about the standards or Lack of in Elaine O Hara(R.I.P) case Coverage on TV,Papers,Radio Salacious Disrespect to the family — Anna Farrelly (@farrelleye) January 22, 2015

I’m going to write a complaint to #RTE about their coverage of the Dwyer case. Disgusting details on #sixone that kids might have heard.

Alternatively, following Marie Louise O’Donnell’s appearance on Tonight With Vincent Browne last night in which she asked: “Do we need to know those details?…I’m in favour of censoring, censoring is the wrong word but I think we need to be more measured.”