Tibetans and supporters mark March 10 each year to show solidarity with Tibetans inside Tibet and to honour and support the resistance to Chinese rule that continues to this day. 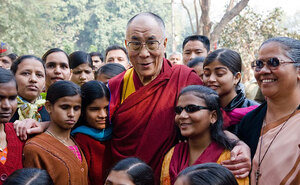 Hey Buddhist, can you spare a dime?

Richard Moore, Director of Children in Crossfire with the Dalai Lama at the City Hotel, Derry yesterday.

Watch Dalai visit the Peace Bridge at 1pm today and give a public talk in Ebrington here.