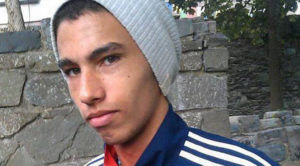 Darren Hughes-Gibson, 17, from Balbriggan, Co. Dublin, who died by suicide
in August 2012

It emerged yesterday, at the Dublin Coroner’s Court, that gardaí have launched a criminal investigation into Darren Gibson-Hughes’s death.

Darren’s mother, Elaine Hughes, believes her son was cyberbullied on Facebook before he took his life because he was mixed race and had a hearing aid. She believes threatening messages were left on his Facebook but that they were deleted after his death. She has been asking Facebook to allow Gardaí access Darren’s Facebook account for the last year.

In a previous sitting of Darren’s inquest, in June, the court heard from Garda Fergal McSharry. At the time, Gareth Naughton, in the Irish Times, reported:

Garda Fergal McSharry told the court yesterday they had been liaising with the Federal Bureau of Investigation (FBI) in the US on retrieving the messages from Facebook. “Headquarters here in the Phoenix Park got on to the FBI who got on to Facebook . . . and Facebook have not co-operated with them,” he said.

A Facebook spokesperson, when contacted after yesterday’s hearing, said: “Facebook’s law enforcement team works closely with agencies around the world. We respond to valid legal requests for information and encourage law enforcement agencies to follow our guidelines to help take their cases forward.”

Updating the coroner on the gardaí’s efforts, Detective Inspector Kieran Holohan said that a criminal investigation into potential harassment is being carried out.

“Maybe I’m missing something but..the Facebook statement from June doesn’t appear to suggest there was any need for a criminal investigation to be under way in order for Facebook to respond to requests for information. The company’s only stipulation appears to be that the Gardaí’s request be valid and legal. Doesn’t their statement suggest the Gardaí’s request wasn’t valid? Maybe because it was via the FBI? Eitherway, doesn’t the latest news that ‘the [criminal] investigation will provide grounds for the application to access Darren’s Facebook accounts’ call into question the validity of the gardaí’s original alleged request to access Darren’s Facebook account?”

Mother of 17 year-old who died by suicide found ‘horrific’ and ‘threatening’ messages on his phone, inquest hears (March 3, 2014, Independent.ie)

Tragic teen ‘may have been bullied’ before his suicide (August 30, 2012, The Herald)