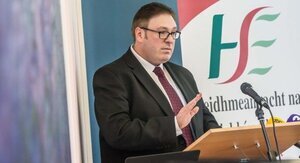 You’ll recall the publication of the HSE-commissioned Conal Devine report last week in relation to an abusive foster home in the south-east of Ireland.

The report was completed in 2011 but wasn’t published until this week, with the HSE citing that they were prevented from doing so because of ongoing Garda investigations.

However, documents obtained by RTÉ’s This Week show the HSE only contacted the gardai about the publication of the report in 2015 – three years after it was completed.

Yesterday, This Week, prssenter Colm Ó Mongáin interviewed Head of Operations in the HSE’s Disability Service Dr Cathal Morgan in light of obtaining the documents under the FOI.

Colm Ó Mongáin: “I want to look at the interactions with the gardai. Most recently, on the 16th of November last year, Tony O’Brien [of the HSE] wrote to the Minister for Health and this was concerning the publication of the Conal Devine report. He said, ‘at times, such as this case, [this is the case of Grace], An Garda Siochana requires the HSE to postpone its internal investigations or to postpone the investigations of a report that could, in the view of An Garda Siochana, potentially prejudice ongoing investigations.
In the opening of the Conal Devine report, it says that the inquiry team met with investigating gardai on the 18th of March, 2011. The gardai stated they had no objection to the inquiry proceeding and completing its task in parallel with their investigation. Do you see any inconsistency between those two positions?

O Mongain: “But as far as internal investigations within the HSE going, as early as 2011 [see portion of document above], when Conal Devine was carrying out his report. The gardai didn’t have an objection to his inquiry team carrying out their work. Correct?”

O Mongain: “OK, so when [HSE chief] Tony O’Brien assured the Minister for Health that, at times such as these, An Garda Siochana requires the HSE to postpone internal investigations, that doesn’t tally with what the Conal Devine report team says about March 2011?”

O Mongain: “And when were the guards first contacted about the publication of the Conal Devine report?”

Morgan: “I don’t have the exact date here, to hand.”

O’Mongain: “Ok, well in a Freedom of Information request that was submitted by this programme, there was a list of interactions between the HSE and the gardai. And the first interaction with the HSE, to consult on the publication of the Conal Devine report, was the 6th of March, 2015 – over three years after it had been completed. It was also the day after the Public Accounts Committee was contacted with a protected disclosure by one of the whistleblowers. They were contacted on the 5th of March, 2015. And the first contact with the gardai is on the 6th of March, 2016 [sic]. Do you think there’s any connection between those two things?”

Morgan: “I don’t think so. I don’t believe there’s any conspiracy here…”

O Mongain: “The garda investigations are also criticised in the Conal Devine report. Does it not seem strange that HSE, at local level, and gardai, at local level, were effectively being given a veto over a report that was into their conduct?”

Morgan: “Well, I think, my read of, the benefit of the Dignam report absolutely clarifies and there was a letter, as you know, that came from the Assistant Commissioner which said that the HSE were perfectly entitled to publish the report but they had to have due regard to the investigation and due process…”

O Mongain: “Well, yeah, that was from Assistant Commissioner Eugene Corcoran. He wrote to the Dignam…and this was on the 15th of July of last year. He said the position of An Garda Siochana, on the matter of publication, should at all times have been understood as being that no objection to publication arises in the circumstances where the interests of affected party and/or the overall public interest require it. In particular, no objection to publication arises in certain stances, where publication is necessary and appropriate to fulfil any or all obligations to the affected party.…”