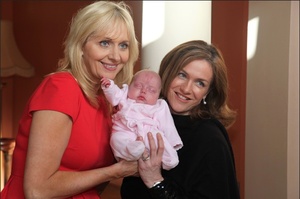 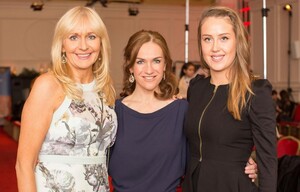 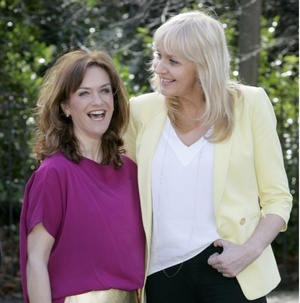 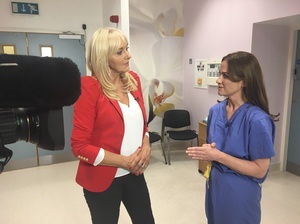 Was it it appropriate that Miriam O’Callaghan was chosen to interview Rhona Mahony, the Master of Holles Street [on last night’s RTÉ Prime Time] when she has been involved in a fundraising project for the National Maternity Hospital Foundation, where Ms Mahony and Peter Boylan, whom Ms O’Callaghan also interviewed, are directors, and also, on pictorial evidence alone, Miriam and Rhona appear quite close? This morning on RTÉ Radio One’s Today with Sean O’Rourke the handover of the ownership of the National Maternity Hospital to the Sisters of Charity was discussed.

Sean O’Rourke: “The concern over the ownership and governance of the new National Maternity Hospital to be located at St Vincent’s Hospital at Elm Park, continues to grow. The new Minister for Health, Simon Harris, has said the hospital will have complete clinical, financial, budgetary and operational independence, however on Morning Ireland earlier, the former Master of the National Maternity Hospital, Dr Peter Boylan, said that in his view it’s inappropriate for the State to invest 300 million Euro of taxpayers’ money into a new maternity hospital that would have a strong religious influence.

With me now in studio are the current Master of Holles Street Dr Rhona Mahony and the Chair of the Hospital Board or he’s de facto the Chair, former President of the High Court Nicholas Kearns who both represented Holles St in the negotiations with St Vincent’s Hospital. Good morning to you both, you’re both very welcome to the studio. First of all, Mr Kearns, are you surprised by the controversy that has engulfed this move .. several weeks, a couple of months after it was announced?”

Nicholas Kearns: “Very surprised. In Holles Street we are surprised and disappointed in particular by Dr Boylan’s late intervention in such a public way in this whole matter, it’s very difficult for us to understand, he’s a serving member of the Board, a board which voted by an overwhelming majority to approve this agreement, this is in a sense nothing new, the idea of moving to the campus in Elm Park has been there since 2003, through all these years that followed Dr Boylan has been working in the hospital up to his retirement last year, the proposal has been there, nothing has been changed, when these latest round of negotiations began in 2016 we spent up to six months battling for exactly the kind of independence and safety of the ethos and practice of Holles St we could possibly obtain and we are satisfied and I am satisfied, Sean, as a lawyer that the arrangements we have put in place for independence are legally accurate and sound.”

O’Rourke: “And that agreement, has it been published?”

Kearns: “The full terms of it have not been published, this was an exercise conducted on a confidential basis throughout by [workplace mediator] Kieran Mulvey.”

O’Rourke: “At this stage might help if the whole thing was published and put out there and people could decide.”

Kearns: “In effect, the Minister has disclosed the key elements in these reserved powers and I was frankly surprised that people are not reassured by the binding nature of these reserved powers, can I just run through them quickly? Firstly, as one of the main objectives for the agreement it provides that under this arrangement the new company, the hospital in Elm Park, will provide a range of health services in the community as heretofore, such operation and provision to be conducted in accordance with the newly agreed clinical governance arrangements for the National Maternity Hospital at Elm Park by providing as far as possible by whatever manner and means from time to time available for the health happiness and welfare of those accepted as patients without religious or ethnic or other distinction and by supporting the work of all involved in the delivery of care to such patients and their families or guardians including research or investigation which may further such work. Now just very quickly the reserved powers and then I’ll stop. END_OF_DOCUMENT_TOKEN_TO_BE_REPLACED Dr Rhona Mahony, Master at the National Maternity Hospital, spoke with Myles Dungan on RTÉ’s The History Show last night, in which she recounted the history of giving birth in Dublin in the 20th Century.

At the end of the interview they talked about the future of medicine.

Myles Dungan: “This is not a history show type of question but would you like to gaze into your crystal ball and tell us what will be the next major breakthrough in obstetrics?”

Rhona O’Mahony: “It’s almost there: why women got into labour? It’s unbelievable.”

Dungan: “Why women go into labour?”

O’Mahony: “So we know so many things but, I’ve just been over to Boston and I gather that’s hot off the press, it’s related to free foetal DNA and the increase of which causes labour. That’s going to have a huge impact because we need to know why women go into labour early because premature birth causes 75% of our deaths in babies and also 50% of the long-term disease. I think the other big things will be genetics. I think medicine will get very different actually. I think it’s going to be a real case of it getting very personal. So, in other words, you’ll be born, you’ll have your genome identified, you’ll work out all the diseases that you’re likely to have in the future. You’ll be vaccinated against all the infectious diseases, you’ll be operated on, and it won’t be done by someone in Amsterdam because it’ll be done by a robot and you’ll be able to have consults all over the world and you’ll have all kinds of surgeons all over the world. Your iPhone will do a lot of your medicine for you. You’ll get your ECG, maybe you’ll get an app for testing your blood sugars, you’ll send it all off into your doctor, you’ll take a picture of the mole on your arm that you don’t like, you’ll send that in and you’ll get an opinion on it. Instead of a colonoscopy, you’ll just swallow the iPill and you’ll send the photographs to your phone and you know, “Does my colon look big in this?” – what a selfie that will be. So it will be very different. Prosthesis will be better than original limbs so maybe you’ll have a Special Olympics for the prostheses but the technology is already there. So it’s all going to be about how do we apply this technology into current medicine that’s going to be very personal.”

Dungan: “Oh brave new world to have such apps in it.” Rhona Mahony has repeatedly failed to give the HSE evidence to support her claim that her €45,000 salary top-up was in respect of fees from private patients. Despite ‘several’ attempts from senior HSE figures to get information, the Master of the National Maternity Hospital has not explained how her €236,000 HSE salary is topped up.
PAC chairman John McGuinness said Dr Mahony would be compelled to come before the committee if she did not explain her top-up to the HSE.
Yesterday, it emerged that Dr Mahony even attended a high-level meeting with HSE director general Tony O’Brien last month where she was asked to hand over payslips and bank documents dating back four years. After details of Dr Mahony’s salary became public last month, a PR firm issued a statement on her behalf, claiming that the €45,000 – paid on top of a €236,000 HSE salary – was ‘in respect of professional fees from private patients attending the National Maternity Hospital’.

Has the Mail lost the true meaning of Christmas? Irish Times article on St Vincent’s has Dr Rhona Mahony as main picture even though only two lines in the article are about her – not sure if it’s very fair considering they also mention a Dr. Sam Coulter Smith who received more in an “allowance”. THE HSE last night contradicted reports that Dr Rhona Mahony’s €45,000 salary top-up was her earnings from treating private patients. In fact, the extra payment to the Master of Holles Street was derived from ‘rents, licence fees and other income’, a Dáil committee was told.

Yesterday, Geraldine Smith, assistant national director of the HSE, told the Dáil’s Public Accounts Committee that when she asked the source of privately-funded payments to Holles Street managers, she was told: ‘External funded equals private funded, including rents, licence fees, other incomes’.

Ms Smith did not indicate that she was referring specifically to Dr Mahony as one of those four. She said: ‘When I asked them to specify the elements of the private sources, they gave the definition: external funded equals private funded, including rents, licence fees, other incomes. All I can say is what the National Maternity Hospital has provided to me (which) is that private funds come from licences, other income etc. They haven’t said it was from private patients. They haven’t dealt with that level of specificity.’

Last night a spokesman for Ms Mahony said she had nothing further to add at this time. “National Maternity Hospital Master Dr Rhona Mahony [above] has said her remuneration is strictly in line with the contract she has with the hospital and is in compliance with public service pay requirements. In a statement, Dr Mahony said the additional €45,000 paid to her did not come from the health service or any other source, including fundraising and charitable donations.

“She said it was from professional fees from private patients attending the National Maternity Hospital. Dr Mahony said her contract allows her to provide clinical care to private patients, as is the case with all consultants in the Irish health service who have the same consultant contract as she does. She said she had been I “personally vilified over the last few days.” “This has been utterly unwarranted,” the statement concludes.” Further to reports that Dr Rhona Mahony, Master of the National Maternity Hospital is getting a ‘privately funded’ top-up of €45,000 in addition to her salary and allowances of more than €236,000….

Figures obtained by the Irish Independent also reveal that the Central Remedial Clinic in Dublin is paying its chief executive Paul Kiely more than €135,000 in salary and allowances from its own funds on top of his HSE-funded salary of €106,900.

The clinic is also paying private allowances of at least €32,000 to four other executives. The organisation, which has a range of services for children and adults with physical conditions, has a fundraising department and a large number of corporate donors. To Russia with Love will host an ‘Inspiring Women’s Lunch’ on September 13 in The Marker Hotel, Grand Canal Square, Dublin.

Menz are welcome too.

To Russia with Love Worth watching ’til the end.

Previously: Down This Holles Street