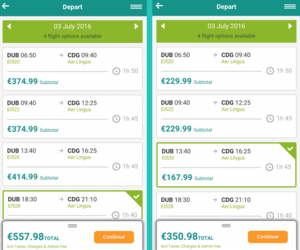 We all know they tweak with fares but its worthwhile seeing it in action now and again. Aer Lingus prices to Paris for this coming Sunday, the day Ireland ‘might’ have played had they won. Before and after yesterday’s game. The 13:40 flight was €414.99 before KO and down to €167.99 after the Boys in Green’s adventure was ended.