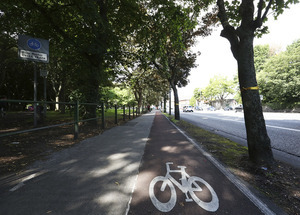 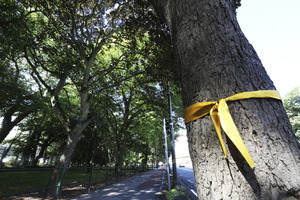 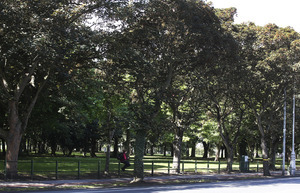 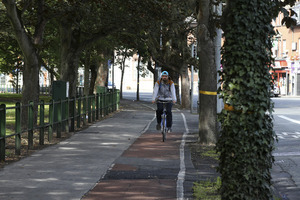 Some of the 50 trees earmarked for felling as part of the design of a new 2.5km cycle route from Clontarf to the city centre are honoured with yellow ribbons.

City councillors, environmental groups, and cycling organisations have said the trees, some older than 100 years old (see below) should not be sacrificed to make way for the cycle path and an alternative solution should be found.

Dublin City Council said the proposed cycle path could be scrapped if councillors do not approve the designs for its development.

New research by the East Wall History Group has shown that the trees are of significant historical interest. Their planting contributed not only to the proper development of Fairview Park but also helped initiate a reforestation programme across the country .

The full historical background can be found at link below…

33 years after Declan Flynn was beaten to death in Fairview Park – this is Fairview now! #MarRef pic.twitter.com/tCiIu6zkyv

In 1982 during the summer a series of systematic beatings was carried out in Fairview Park, Dublin. Gay men used the park as a meeting place and for cruising.

On September 10, the gang attacked 31-year-old Aer Rianta worker Declan Flynn. One of the gang was used as ‘bait’ and when Flynn sat down next to him on the bench, the other four rushed out from behind trees.

Their victim managed to run towards the gate and the main road but did not get out of the park in time. They kicked and beat him with sticks and left Declan Flynn lying on the path choking on his own blood. He died within an hour of admission to Blanchardstown Hospital.

His attackers ” were all part of the team to get rid of queers in Fairview Park.”

In March 1983, in court, Justice Sean Gannon gave them suspended sentences for manslaughter and allowed the five to walk free. “This,” he said, “could never be regarded as murder.”