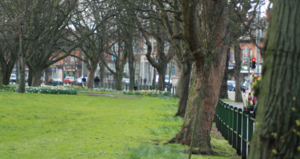 The destruction of the trees is not required for the cycle route and a better, safer, and more attractive cycle route than the one planned can be built without knocking down the trees.

The competing interests are wide-ranging. They include councilors and others who don’t want to see traffic lanes reduced, and those who think traffic lanes should be taken out before trees are cut down.

Other interests include the National Transport Authority and one of its planned bus route upgrades (to so-called BRT standard). And there’s the council officials who want an “esplanade” — translation: a shared walking and cycle path with fancy paving running along a redefined edge of Fairview park.

Then there’s the planned cycle route. Despite planning on holding Velo City in 2019, an international cycling conference, with the tagline “cycling for the ages”, the council are set against proper, Dutch-like segregated cycle paths suitable for all ages and abilities.

There’s loads of space inside the tree line for separation of cycling and walking — and this is much the same for nearly all of the length of the park. Most of the current shared surface of the footpath / one-way cycle path between the trees and the roadway can be greened, with space left for bus stops and cycling and walking crossings.

Dublin needs a high-quality cycle route and this can be provided without cutting down the trees. The current plan from the council is too low grade and does not provide for “cycling for the ages”.

At public consultation for the project a two-way cycle path was also the main preference of individuals, businesses, councillors and cycling groups. It’s not only practical, it has support.

...The images below show an outline concept — note: this will work with or without changing the current roadway (for a BRT route or whatever). And also note that this is a concept, while it will fit, the measurements here aren’t supposed to directly relate to any one section (the widths vary).

Put Them In A Tree Museum 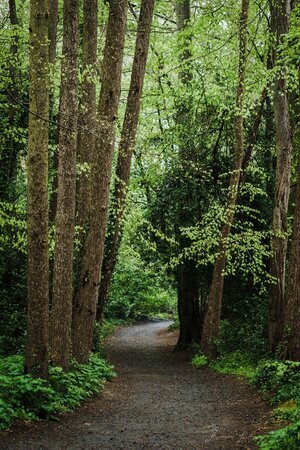