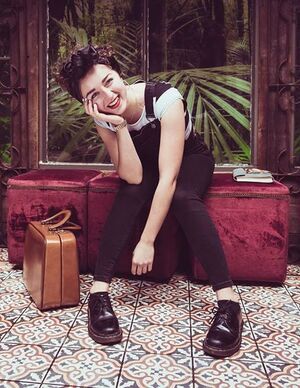 01. Farah El Neihum, a.k.a. Farah Elle, is an alt-pop songwriter living and working in Dubland, with a Libyan background.

02. Graduating from BIMM in Dublin, Farah Elle kicked off in earnest in 2015. Debut single So Scarlet was followed by last year’s single Silk, and attendant critical acclaim. Also recently appeared on Bantum‘s Move album, on standout track Feel it Out.

03. Streaming above is Curfew, taken from her appearance at the December installment of Sofar Sounds in Dublin, alongside backing vocalists Cat Smyth and Fiona Harte.

04. Appearing at the 50th-episode special of Headstuff.org’s No Encore podcast, happening at the Workman’s Club on the 2nd of March. Also on the bill: We Cut Corners, Bantum and Windings performing live, and guest appearances from Michael Pope (Le Galaxie) and MayKay (Other Voices/Fight Like Apes).

Thoughts: Ridiculously talented, and with her whole career/body of work ahead of her, it’s surely only a matter of time before Farah Elle hits upon bigger things.