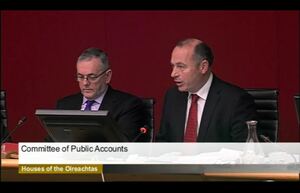 It’s being reported this morning in several newspapers how the Garda Commissioner Martin Callinan has written to the Public Accounts Committee – which acts as the Dáil’s money-spending watchdog – asking for the return of a “box of evidence” that a Garda whistleblower handed to chair of the committee, John McGuinness.

The “box of evidence”, first reported in the Irish Examiner earlier this month, is believed to contain previously undisclosed information about the alleged widespread quashing of penalty points and subsequent loss of revenue to the State .

You’ may recall that on May 15 of this year, an internal garda report into the allegations, led by Assistant Commissioner John Mahoney, concluded there was no such widespread quashing and largely rubbished the whistleblowers’ allegations.

But on October 1 last, the Comptroller and Auditor General found that one in five motorists avoided penalty points because their cases were not pursued.

It’s understood the “box of evidence” contains information that the C&AG did not have at the time of their report.

In his letter to Mr McGuinness, Mr Callinan claims that the whistleblower may have contravened the Data Protection Acts 1988 and 2003.

The Irish Examiner reports that the Data Commissioner Billy Hawkes wrote to Mr McGuinness on Tuesday, saying “a crime” may have been committed by the whistleblower.

Section 62 of the Garda Síochána Act 2005 says a garda may disclose confidential information to “a member of either of the Houses of the Oireachtas where relevant to the proper discharge of the member’s functions”.

Meanwhile, this morning, the Public Accounts Committee clerk Ted McEnry, above, told  how the evidence remains unseen by members of the committee and has been sent to the parliamentary legal adviser. The committee is still waiting for this legal advice.

Mr Callinan’s request for the fresh evidence comes ahead of his and a whistleblower’s scheduled appearance before the Public Accounts Committee on January 23.