The eejit market in AIB http://t.co/i2YpgGPoUU 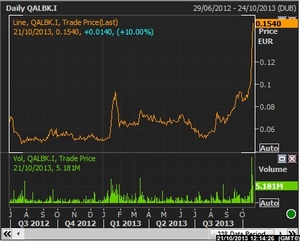 That’s Allied Irish Banks’ rocket-fuelled stock price. The bank is now capitalised at €78bn or $99bn.
Ahead of the Irish 2014 budget (which is expected to include a fresh bank levy) along with the forthcoming stress tests, AIB is trading at an heroic 12 times NAV.
The thing to bear in mind here is that AIB has a comically small free float — just over 1bn shares, against the 517bn or so in issue.
Some 516bn of those are owned by Ireland’s National Pensions Reserve Fund Commission. AIB is 99.8 per cent state-owned.
So why is the price so inflated? Investors are aware there’s an overhang, right?
There’s no sane explanation. Best guess is that with shares in bigger rival Bank of Ireland (market cap €8bn) rising from 21 cents to circa 25 cents this month, AIB, currently at 15 cents, has been tracking it higher.

But there’s also another factor that may be at play here: when, on December 30, 2011, the Central Bank of Ireland announced an end to the ban on shorting financial stocks, which had been in place since September 2008, it didn’t include AIB.

So AIB can’t be shorted! 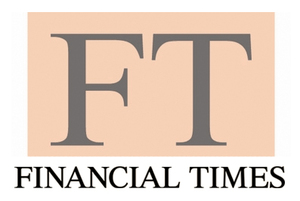 “The tax avoidance schemes are so complex it elevates the position of accountants, causing young talented people to gravitate to these jobs rather than becoming engineers or moving into positions that build innovation,” says Jim Stewart, associate professor of finance at Trinity College Dublin.

“It is also dangerous. With the stroke of a pen in another country, companies located in Ireland relying on tax incentives could choose to relocate.”

And Ireland’s success in attracting investment and its use of fiscal incentives is less popular abroad.

Nicolas Sarkozy, the former French president, tried to make an increase in Ireland’s corporate tax rate a condition of the country’s €67.5bn international bail out in 2010. Dublin stood firm against Paris, but criticism is intensifying amid evidence of multinationals using increasingly complex tax avoidance strategies to avoid even paying the 12.5 per cent rate in Ireland

Last year a US Senate committee pinpointed three Microsoft subsidiaries in Ireland as playing a key role in an “aggressive” global tax structure aimed at saving itself billions of dollars in US tax. In 2011, the structure saved the company $2.43bn in US taxes. Google has also been widely criticised for using legal tax avoidance strategies, dubbed the “Double Irish” and the “Dutch sandwich” by the accountants who devise them.

John Christensen, director of the London-based Tax Justice Network, says loopholes in Irish tax law enable companies to book profits at near-zero tax rates. “Ireland’s membership of the EU means that many countries that apply withholding taxes on payments to tax havens treat Ireland as an ‘onshore’ country. These factors make Ireland a useful conduit for tax avoidance,” he says.

Michael Noonan, Ireland’s finance minister, rejects the accusation that Ireland is a tax haven and points out that multinationals employ thousands of people in real business activities. “It is America’s tax code that allows for this tax planning,” he told parliament recently, referring to the system that allows US multinationals to pay their tax in Ireland, not the US.

Privately, Dublin is concerned about the Organisation for Economic Co-operation and Development’s call for countries to catch companies dodging corporate tax. 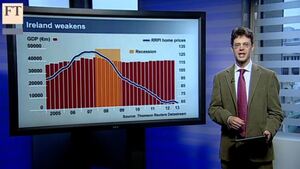 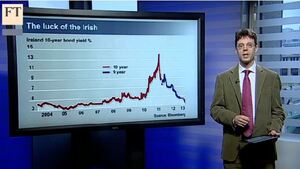 Investment editor of Financial Times, James Mackintosh, has some news.

1. We’re back in recession.

2. Our exports of goods are falling at a faster rate than during the ‘global financial crisis’, due to a weakened demand from the UK and Europe, and the expiry of important patents on medicines.

3. Austerity fatigue is setting in.

4.  Ireland plans, for the first time since the 2010 bailout, to miss one of the targets set by the Troika. 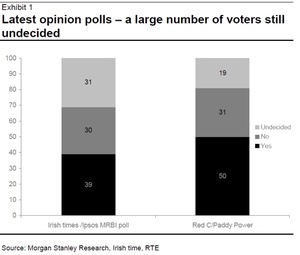 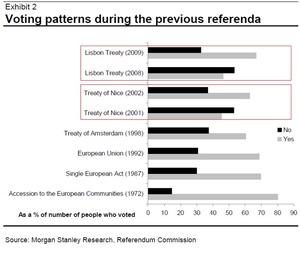 “The problem is that although recent polls suggest Ireland is leaning towards a Yes vote (see chart above and supposed market-happiness, the polls vary widely and might tend to exaggerate any Yes position due to the large chunk of undecideds still out there who have a tendency to eventually head into the No camp”