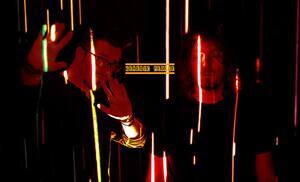 01. Ant, Ronin and collaborators are the ever-evolving, media-agnostic group known as Generic People.

02. Beginning life as a collaborative electronic project, the group has expanded from production, DJing and playlisting, to live open improv performances, to large-scale visuals and multimedia installations, including the recent large-scale projections of Maser’s Repeal the 8th logo in Cork City.

03. Streaming above is a preview of the band’s upcoming live album, recorded live at the Cork School of Music and filmed by local production house EPIC. The band have also put down a live 12-hour mixtape of dark disco and other deep cuts.

VERDICT: Platform and medium are no restriction for the ever-evolving Generic People, and given the opportunity to flourish on the biggest stage Irish music has to offer, you can guarantee something special.