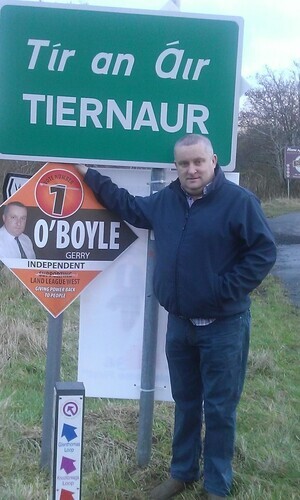 A defeated Mayo candidate in the general election is to launch a High Court bid to have the constituency’s result declared null and void and a new election called.

Independent candidate Gerry O’Boyle received just 126 first preference votes, but he claims ‘there was a thousand votes robbed off me’.

Mr O’Boyle further claims that he lost a lot of votes in Claremorris and Ballyhaunis, claiming votes went ‘missing’ sometime between the polling stations closing on Friday night and the count starting in the Royal Theatre in Castlebar on Saturday morning.

Ballyhaunis-based O’Boyle said he is lodging High Court application papers this week and applying to get the ‘General Election Mayo four-seater recalled as a new election’.

“I’ve had people contact me from all over the county who said they voted for me and it didn’t come through. I’m not in this to get a seat. I know my vote wouldn’t be that high, but I expected to get 1,000 to 1,200 first preferences,” Mr O’Boyle told The Mayo News last night.

“For instance, in the Crossboyne box I have nine dead certs there, and only one vote came up on the tally. We have a whistleblower in relation to what I am saying, but I am not willing to say any more about the whistleblower, as there is a legal case pending. We’ve enough evidence. Independents were targeted. You might think I’m mad, but I’m not. It was a total fraud,” he added.

…“Something went wrong. I’m not a whinger. I’m a fair sport player. I can take my beating. I’m not a child throwing my rattle out of the cradle. I know I’m right here,” he said.