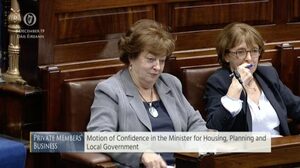 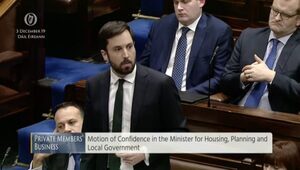 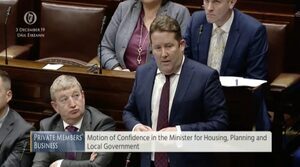 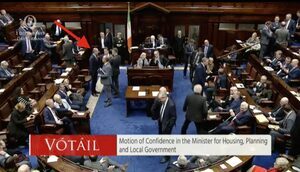 The party’s leader Mícheál Martin didn’t attend the debate but did appear when the vote was taking place.

The motion was defeated by 56 votes to 53 while 35 TDs abstained.

He repeated what he told the Dáil last night – that the motion “one way or another is not going to house one person or take one person off the homeless list”.

He then had the following exchange with broadcaster Rachel English.

Rachel English: “…by voting the way you did last night, by abstaining, weren’t you effectively supporting and facilitating a policy that you believe has failed?”

Darragh O’Brien: “No, we weren’t. We were very clear. Early last week my party leader said it, and I said it too, that we were abstaining in the national interest, to ensure that there wasn’t going to be Christmas general election.

“And I think people have been very clear about that. So, you know, it’s not a question of us supporting Government housing policy, we don’t. We have put forward alternatives on a regular basis.

“We want to put home ownership back at the centre of the solutions to this housing crisis and get the thousands of people who are on the housing waiting list – get them housed and get their families housed.”

English: “And in the meantime then, is it your policy that Rebuilding Ireland should be scrapped?”

English: “So you believe Rebuilding Ireland should be scrapped? It’s failed?”

O’Brien: “If the public were good enough to elect us at the general election early next year, we will have a different housing plan that would not be Rebuilding Ireland.”

English: “Just to pick up on something you said there, you said ‘an election early next year’, does that mean that May is too late?”

O’Brien: “No I don’t think. Micheal Martin was clear yesterday when we had our press conference and he said ‘look, probably the natural end to this will be after the Easter recess’ so you’re looking at an April/May election. And that would be I think a disorderly wind-down of Government would potentially be in everyone’s interest, in everybody’s interest, to allow the public, you know, have their say, and I want…”

O’Brien: “Orderly, sorry, orderly would be the preference. But look events and that in the future, who knows. But what we want is the public to have their say on Fine Gael’s failed housing policy.

English: “You’re talking about an April/May election and not before that?”

English: “You’re talking about an April/May election ideally, as far as your concerned?”

O’Brien: “That is, as Micheal Martin, has outlined and we’ve been very clear and honest with people over the last couple of years in relation to where we’ve been and we’ve seen this through and it’s been difficult sometimes.

“There may have been shorter term party political gain to be gleaned by running to the country earlier but we haven’t done that.

“We’ve put the national interest first and that’s what we’ll continue to do and we look forward to fighting a general election early next year when we put forward our alternatives and let the public have their say on Eoghan Murphy and Simon Harris and failed health and housing policies.”

English: “All right, thank you very much…” 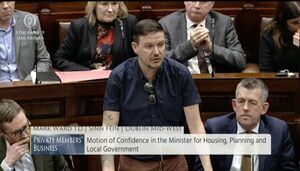 Sinn Féin TD Mark Ward, who secured the Dublin Mid-West seat in last week’s by-election, told the Dáil that the normalisation of the housing crisis is “not normal”.

He said it’s “not normal” to have almost 4,000 children spending Christmas in temporary accommodation.

He said it’s “not normal” for adult children to live with their kids in a back room belong to their parents and to have three generations living under one roof.

In a message directed at the two Fianna Fáil TDs – Pádraig O’Sullivan and Malcolm Byrne – who were also elected last week, he said: “You did not get elected to sit on your hands.”

He urged support for the motion, saying “that’s normal”.

Dara Murphy resigns (potentially as early as today) and the government margin on confidence votes is 56-55.

Flip any of Lowry, Grealish, Naughten and it’s over. 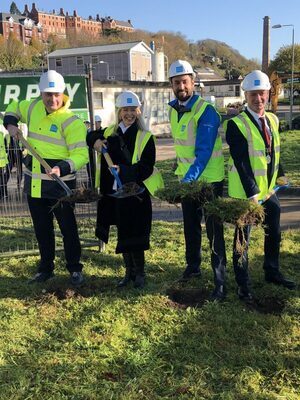 Eoin English, in The Irish Examiner, reports that the Housing Minister Eoghan Murphy responded to criticism of the Government’s response to the housing crisis by Fr Peter McVerry.

Eoghan Murphy warned that the State can’t just “throw up houses” overnight and must consider how to build communities too.

“So we have to think, are we building it in the right place, to the right standards and specifications?”