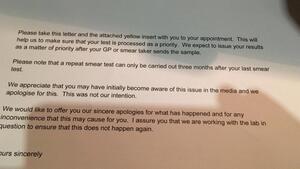 CervicalCheck logo; a letter a woman received in early February informing her she needed to have a repeat smear test as a consequence of a test she had in the summer of 2016

In January, it emerged that thousands of women were to be written to and advised to return to their GPs for repeat smear tests.

This was in relation to a cohort of women who would have initially tested positive for low-grade abnormalities after having a smear, between 2015 and 2018, and who would have then been advised to have an additional HPV test within 30 days of the initial smear test.

In the cases of these women, the HPV test on the smears were carried out by Quest Diagnostics beyond the 30-day limit.

By the end of January, the HSE wrote to 4,459 women about this situation and invited them to have a repeat smear.

This afternoon it’s emerged that, since February 8 last, 2,572 of these repeat smears were sent for testing and just 200, or 7%, of them have been rechecked.

This means around 2,370 women are still waiting for their repeat test results.

In addition, the repeat tests were sent to…  Quest Diagnostics.