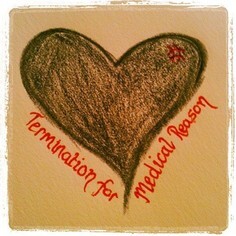 Human Rights Ireland – a blog run by academics, mostly lawyers, interested in human rights – have claimed a letter that appeared in the Irish Times’ print edition last Thursday (June 13) did not appear online.

The letter concerned  Health Minister Dr James Reilly’s insistence that the Protection of Life During Pregnancy Bill could not include legislation to allow for women, carrying foetuses with fatal abnormalities, to have terminations in Ireland.

The 43 academics who signed the letter maintain Dr Reilly could and should have included the legislation.

We understand that the Minister for Health has been advised that it is not possible to include terminations for fatal foetal abnormality in the Protection of Life During Pregnancy Bill, 2013. With respect, our initial response is to disagree. It is possible to interpret Article 40 3 3 so that the ‘unborn’ that is protected therein does not include those foetuses with fatal abnormalities. The Irish courts have not considered this legal issue and there is no binding precedent excluding such an interpretation.

Moreover, the Legislature has the power, and the duty, to legislate under the Constitution. When Justice (Niall) McCarthy criticised the Legislature for failing to regulate the terms of Article 40 3 3 in the X case in 1992, he was speaking of a duty that existed prior to that case. The interpretation and regulation of Article 40 3 3 is not limited to the circumstances which arose in X. That case showed how the general principle, of vindicating unborn life with due regard to the equal right to life of the mother, justified a termination in the particular circumstances of suicide risk. A different set of factual circumstances, such as those of fatal foetal abnormality, could also legally justify a termination of pregnancy given that these ‘unborns’ will not live once born. Therefore, it is within the Legislature’s power to act on this possibility and regulate for these circumstances.

The State used this legal argument to defend itself against the unsuccessful claim of Deirdre Conroy in the European Court of Human Rights, as she explained in The Irish Times on 31 May 2013. The High Court declined the opportunity to address this argument in D v HSE. The Court ruled instead that D, who was pregnant with an anencephalic foetus, could travel for a termination of pregnancy. The women of Termination for Medical Reasons, including Ruth Bowie and Arlette Lyons, have spoken publicly of being unable to access the healthcare they wanted in Ireland when their pregnancies were found to be unviable. In these circumstances, the Legislature has a moral as well as a legal duty to act now and include abortion for fatal foetal abnormalities within the Bill.
We urge the Minister to publish his legal advice on this issue so that it can be assessed and discussed. We ask the Minister to reconsider his position and to minimise the suffering of those women and couples who wish to end their unviable pregnancies at home.

Previously: So Why ARE Women With Non-Viable Pregnancies Being Forced To Travel To the UK? 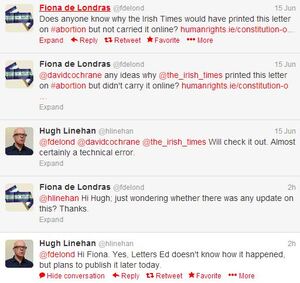