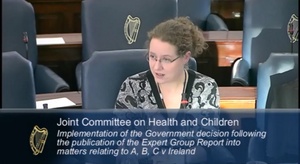 Jennifer Schweppe (above), from the school of law at the University of Limerick, appeared at the Joint Committee on Health and Children hearing on abortion legislation this morning..

She said that, it is her understanding, that women who have been told their foetuses have zero chance of survival are legally permitted to have terminations in Ireland.

She claimed this is based on the Roche Vs Roche ruling in the Supreme Court in December, 2009.

This case involved Mary Roche, then 43, who was estranged from her husband, but who wanted to use three frozen embryos created from a previous IVF treatment, to have more children.

Mr Roche did not want this to take place.

Mrs Roche argued that the frozen embryos constituted the ‘unborn’ under Article 40.3.3 of the constitution. She claimed the State was ‘obliged to facilitate their implantation’.

However, the Supreme Court disagreed and ruled that the term ‘unborn’ in Article 40.3.3 only applies to embryos after they’ve been implanted in the womb. It doesn’t apply to frozen embryos and therefore, they cannot be afforded the legal right to life as guaranteed by the Constitution.

The now Chief Justice Susan Denham ruled there must be a physical connection between the mother and her unborn child in order for the embryo to be afforded the right to life.

Jennifer Schweppe: “My position on this is, and I think that I’m correct in stating the law as to be, where the foetus has no capacity to survive outside the womb, that that is not life for the purposes of Article 40.3.3. So when we talk about ‘unborn life’ in the constitution what we’re talking about, as Ms Justice Denham,stated in the Roche and Roche case, we’re talking about life which has the capacity to be born.

Now in that case, it did relate to embryos, so embryos which were implanted in the womb. But I think that her reason and her logic in relation to what the constitution protects and what it doesn’t protect, I think it applies in relation to foetuses which have absolutely no capacity to be brought to term and to produce a living baby. I don’t think that Article 40.3.3 applies there.
“Perhaps, as a matter of clarity, the legislation should, in a declaratory manner, state that. But I don’t think we need a constitutional amendment where, as a matter of probability, doctors are of the opinion that the foetus has no capacity to be born. I think that that’s the legal situation.
“The problem I guess arises where doctors are of the opinion that the foetus has the capacity to be born but that it will only survive for a short period of time, be it a matter of days, a matter of weeks. Tragically, I think that in circumstances such as that the constitution does not permit termination of pregnancy and unfortunately women in that position do currently need to travel to terminate those pregnancies.
“I don’t agree with this position. I didn’t see the Vincent Browne show last night [Arlette Lyons from from the group Termination For Medical Reasons (TFMR)] appeared] but I think that a constitutional amendment would be required in those cases, where there is prospect of life outside the womb, where the pregnancy is a viable one. But where we talk about inevitable miscarriage, as Dr [Simon] Mills [who had spoken earlier] talked about, where we talk about where the foetus has no capacity to be born alive. So, adopting the born to alive rule, I don’t think a constitutional amendment is needed, I do think that legislation should include a declaratory statement to that effect and permit medical practitioners to terminate pregnancies in those circumstances.”