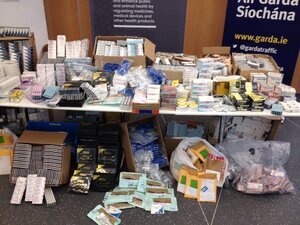 Over 60,000 units of illegal prescription medicines have been seized as part of a week-long operation by the Health Products Regulatory Authority.

The seizures include 78 abortion pills illegally imported, in the form of Misoprostol and Mifepristone.

The counterfeit and other illegal medicines were worth around €350,000.

Earlier: ‘The Ashes Were Unexpectedly Delivered To Her Three Weeks Later’