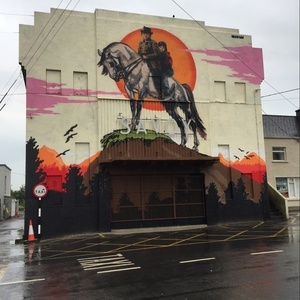 Rúaidhrí Conroy [Tayto] and Ciaran Fitzgerald  [Ossie] immortalised on the old Savoy cinema in Portarlington where scenes from Into The West were shot in 1992.

This day 60 years ago – 24 June 1959 – Walt Disney attended the world premiere of Darby O'Gill and the Little People at the Theatre Royal, Dublin.

Set in the fictional Irish town of Rathcullen, and based on the work of Herminie Templeton Kavanagh, the film featured Sean Connery. pic.twitter.com/7NfySmOon1

A short documentary by the late Aine O’Connor on the making of ‘Into The West’ (1992), the Jim Sheridan-scripted traveller movie, starring Gabriel Byrne and Ellen Barkin. Includes David Kelly, Colm Meany and the movie’s producer, a very young Harvey Weinstein.