Speaking on RTÉ’s Today with Sean O’Rourke following reports that Minister for Transport Shane Ross went against the advice of officials in granting the investment, Mr Halligan said that down the years, such advice from civil servants has not been correct.

The €5m investment from the Government in Waterford Airport was “a small amount”.

He said the airport “was viable and hundreds of thousands of people were flying from there when you were able to land prop planes down through the years“.

Mr Halligan indicated it would be a case of “build it and they will come“, adding that the business would be there once you have the jets. John Halligan, Independent Alliance Minister of State for Training, Skills, Innovation, Research and Development at the Department of Business, Enterprise and Innovation has been named as the person who asked senior female civil servant whether she was married with children during a job interview.

“I shouldn’t be asking you this, but…. are you a married woman? Do you have children? How old are your children.”

“I was simply trying to put the interviewee at ease….“All of my staff start at 10am because they need to get their kids to school and can finish early if they need to.”

‘I was trying to put her at ease’ – Civil servant awarded €7k after John Halligan asked was she married during interview (Independent.ie) John Halligan to fly into North Korea and save the world pic.twitter.com/9nPNwb9vTQ 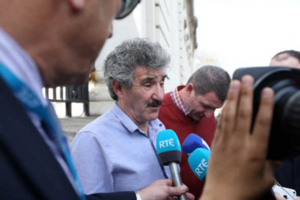 Further to an as-yet unpublished review finding there is no need for a second catheterisation laboratory to be opened at University Hospital Waterford.

And Independent Alliance TD John Halligan reportedly threatening to resign from Government if a second cathlab is not opened there – as promised during his negotiations to enter into Government with Fine Gael.

Mr Halligan spoke to Sean O’Rourke on RTE this morning.

The Waterford politician told the show he is still in Government “for the time being”.

He also said that, even though he hasn’t seen the review, it is “fatally flawed”.

John Halligan: “I’m being quite blunt with you on this and they can deny it if they like but I have witnessed, I had witnesses with me, I had a barrister with me, going through the review, that Minister Noonan told me it was a formality, that they couldn’t be seen to be doing a special deal with a politician. Simon Coveney told me that if I did not sign up to the deal [for Government], they would deliver the cathlab anyway. So, I signed up in good faith. I was honourable in signing up and I’ve been honourable with the Government up to now. They’ve been dishonourable with me… The review has turned, the problem with the review is that it is fatally flawed. That there was parts of the review…the terms of the reference were not included in the review.”

Sean O’Rourke: “Yeah but you had long conversations with Simon Harris, the Minister for Health, last evening. And why didn’t you get to see the review at that or why didn’t you…”

Halligan: “We just didn’t get to it and we haven’t even seen it in Waterford here.”

O’Rourke: “Did he refuse to give it to you?’

Halligan: “Well, what’s going to happen now is I’ve come from a meeting with the hospital, they have asked me, the clinicians in the Waterford hospital not to do anything yet. They’re seeking to look at the review so they can analyse it and show where the review is fatally flawed and then look for a meeting with Minister Harris. And I think, out of courtesy with the hospital, that’s the very least he needs to do and then let’s see where we move from there.”

O’Rourke: “So, just to be absolutely clear about this. You said that there was no issue with Fine Gael, Michael Noonan saying ‘a formality’, Simon Coveney saying ‘we’re going to do this anyway’..”

Halligan: “Yes. Absolutely, why would I tell a lie on that? I have no reason to do that. Simon Coveney told me that, ‘we will deliver’, when talks didn’t look like they were going well, he actually said to me: ‘with or without you, John, we will…by the way, I will say, we will deliver this and we are committed’… He used the terminology here that ‘we are committed to delivering the second cathlab’. Now by the way, I’m not criticising Simon Coveney. I’ve good time for him, I’ve told you that before. But, I felt yesterday when I spoke to him that he seemed to be a bit disappointed and a bit bewildered.”

O’Rourke: “Yes and now you said yesterday I think, to Martina Fitzgerald that this issue had the capacity to bring down the Government. Are your colleagues in the Independent Alliance, are they all standing four-square behind you on this?”

Halligan: “They are, we’ve had a number of meetings at present. This is not what I want to do, Sean. I don’t want to destabilise the Government, contrary to what people might think. They may call me a destabilising character, I’m not. But I do speak my mind, I understand that there are serious issues affecting the country like Brexit, we have a budget to deal with, we have serious issues like Apple and so on. We don’t know what’s coming down the line and I, it’s been difficult enough for me with my ideology to go in an support Fine Gael, which I have done willingly and honourably. And I don’t want to bring the Government and nor do I want to destabilise the Government.”

O’Rourke: “If you resign, will the others resign along with you, Minister Ross and the others?”

Halligan: “I have no idea, Sean. I think… I’m not being smart at all with you, obviously, I don’t know..”

O’Rourke: “Sure if they’re four-square behind you, they have to resign?”

Halligan: “Well, they said they are behind me like so they’ll have to make that decision. To be quite frank with you, I’ll be honest with you again, I wouldn’t like to see the Government destabilised. I think they’ve broken their promise on this. I’m deeply disappointed they’ve done this. I’m hoping there may be some way through this in the next couple of days. If there’s not, I’ll be back on your show again.”

Halligan: “Well I don’t know but I’ll be saying something different to what I’m saying now…”

Halligan: “I think that would be very difficult but what I’m saying now is that, having met the hospital and the clinicians in the hospital that they now are saying, let’s take this out of politics. Give us the review, let us critically analyse this review because we do know, we know that the review is faulty. We know that it didn’t include terms of reference…”

O’Rourke: “So, they’re saying, ‘don’t take any precipitative action… there’s a bit of ‘hold me coat’ about this now, John, listening to you.” John Halligan shoots himself in foot with hospital report, then decides to get tough…

This is the motion John Halligan may vote in favour of, and therefore against the govt pic.twitter.com/6kRrFlDIIl

[Independent Alliance TD John Halligan] says he’s likely to vote against the government in the Dáil this week.

John Halligan says he will probably support a cross-party motion signed by 39 TDs, calling for the immediate abolition of domestic water charges.

The motion is set to go to a vote in the Dáil tomorrow night – just seven days after Halligan was given a junior ministry at the Department of Jobs.

Junior minister may vote against Government this week (Today FM)