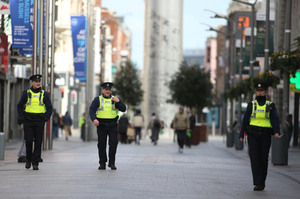 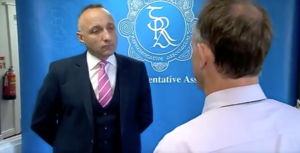 During the discussion, Mr O’Keeffe called for humans rights to be “parked”, an idea to which Stephen Kinsella, who also writes for The Currency, objected.

Mr O’Keeffe went on to repeat his call for human rights to be parked and added that they should become “an adjunct issue until such time as we save our population”.

Brendan O’Connor: “So obviously law and order is on our minds. Last week, 319 recruits effectively graduated early out of Templemore. Lot of those guards now on the streets and a lot of other guards on the street. And also I think in a sense that cohesion holding so far, people kind of worried a little bit about what all this means for crime. So John, I suppose, some people think this is going to lead to some kind of breakdown in law and order and that there’ll be a crime wave. Other people kind of thinking there’s no going to be no crime now because we’re all at home. What’s your thinking?”

John O’Keeffe: “Yeah, they’re probably both right. I mean, typically, crime, it drops during things such as pandemics. For example, 95 per cent of all public order offences are driven by alcohol and/or drugs. And assuming Brendan that nobody has got a mental health illness, there’s nobody going to be charging up O’Connell Street tonight after drinking six cans of Lilt, trying to have a fight with a member of An Garda Síochána.

“So it’s just not going to happen. If no clubs, pubs or restaurants are open, those pressure points fade. Many other offences, of course, are also driven by alcohol and drugs such as violence, violence sexual and indeed theft offences.

“And of course, as regards self defence as well, nothing is open any more. It’s difficult to rob from a shop when it isn’t open. Of course it is possible but all those ordinary, decent offences, if we can call them that, will certainly, I think, probably lessen.

“I mean there is a Dunkirk spirit I think, when it comes to flattening crime levels. In criminology, Niamh will know all about this, is a theory called strain theory which suggests that certain of us commit crime simply because of the strain that society puts on us. You know, we can’t earn the big money, we can’t have the cars, we can’t have the holidays and then we’re pushed out into crime. But strain theory arguably doesn’t work as well during times like we have at the moment where the subcultures…”

O’Keeffe: “Well, exactly my point, that the subcultures of the normative class we’ll call them, with big inverted commas, and the subculture of the criminal classes. The lines are now more blurred and, in fact, we’re all, in one sense, moving together. I mean I do mean this in the most generic sense and we’ve all got the same goal. And the same goal is one word which is survival.

“I mean it’s very simple and although people think that criminals have this notion that, ‘well it doesn’t matter what I do’, they’re fatalistic and there is good research to suggest that, actually, when you think about it, all everybody wants to do is to be alive. Like you can cut it any way you want but that’s what we all want. So that’s common amongst us all now.”

O’Connor: “Ok, now there is drinking going on in the home and we do know that drinking in the home can lead to domestic situations. Are we seeing any kind of rise in complaints about that?”

O’Keeffe: “Yes. France and Australia, they both reported a spike in domestic violence during the Covid-19 outbreak. And there’s been an increase, I have this from a senior source in An Garda Síochána, there’s been an increase already. Now this has been since the 14th of March, right? So we’re talking about the last two weeks, to yesterday, for the exact same period last year where, obviously, there was no lockdown.

“I’ve been advised that there has been a ten per cent increase in what are called domestic incidents that are notified to gardai where no offence was disclosed. So, in other words, call outs. They’ve gone up ten per cent. Remind ourselves of course that it wasn’t until Friday night that [Taoiseach] Leo Varadkar gave us, put us almost into virtual, full lockdown. So it wouldn’t be unusual to assume that, in the next two weeks, we may see that figure rising also.”

O’Connor: “In terms of the policing system, the criminal justice system. Obviously, there’s a lot of stuff already in train. The courts, I think, finished out cases that were happening and then, kind of, have now effectively shut as the cases finish. What’s the situation there?”

O’Keeffe: “Yeah, to an extent. The courts service, they’ve, as you say, a range of measures including relaxing bail requirements and increasing use of video link, you know, to improve social distancing rules. Cloverhill District Court have increased the volume of video links to Cloverhill Prison.

“Solicitors are also being notified which they weren’t necessarily before about trial dates, via email, and each case is going to be dealt with separately. So they are…”

O’Connor: “So trials will still continue?”

O’Keeffe: “They will still continue but slowly. And one of the things that will arguably will suffer is sentencing. I have it on fairly good authority that some 250 prisoners from Mountjoy Prison, from the male wing, have been released early.

“And police in north inner city Dublin are telling me this is already starting to cause some chaos. Now this is anecdotal but 250 is a…”

O’Connor: “Is there a health warning on that, yeah?”

O’Keeffe: “Absolutely but nonetheless, it’s, we know there are a lot of prisoners going to be released. And by the way they were put in…”

O’Connor: “The prison system is a worry here in terms of Covid-19…”

O’Keeffe: “It is a worry…from a criminal justice angle, these people were put in prison for a reason. So just letting them out, we can’t all just suddenly say ‘well, it’s OK, there’s a pandemic. In one sense, you can of course because you must prevent a spread in prison but, on the other hand, the same criminal justice outcomes will potentially arise. So I think that’s a real issue.

“The criminal justice system is going to slow up. I think one of the big issues here is, if I can just mention this point about this idea, we’re hearing a little bit now on social media about human rights. We need to just park human rights for the moment and we need to…”

Stephen Kinsella: “Hang on a second…”

Kinsella: “Hang on a second…”

O’Keeffe: “…this is all about, nothing else…”

Kinsella: “Hang on a second, park human rights? Did you really just say that?”

O’Keeffe: “…well I will. When people’s lives are at risk, as they clearly are at the moment, human rights in the way we have been discussing them in Ireland over the last few years have to become an adjunct issue until such time as we save our population.”

Kinsella: “An adjunct issue? Really? Like you really think that…”

Kinsella: “That’s, no, no, I think you’re fundamentally, you’re, the first part of your discussion was, you know, ‘these people’, you know, who are allegedly being released. And then you’re saying that we need to park human rights. Do you not think that in this society, in a republic, that’s not an acceptable statement to make.”

O’Keeffe: “It is in the context of what’s going on at the moment. Nobody is saying we should forget human rights at any period, least of all now…”

O’Keeffe: “…it takes priority…Human lives take priority so if there are police checks all over Dublin, and by the way, I was stopped three times coming here today. Some other people would say my human rights were infringed, well you know what? I didn’t mind it at all because I know what the end result is meant to be, that’s what I’m talking about. What I don’t want are people getting carried away with what they believe to be human rights issues which, quite frankly, are subservient to human lives…that’s my point.”

O’Connor: “Issues such as what, John?”

O’Keeffe: “Such as what happened to me today, for example. I was stopped, I was asked questions, I wasn’t asked for documents, I told them who I was, I told them where I was going and that was fine. But there are some people who would find that offensive. What I’m saying is I don’t find it offensive and I think none of us should in the next while, until we get over this pandemic.”

Kinsella: “If you’re in a situation where somebody chooses to deprive you of your liberty and they do that based on a suspicion, and that suspicion turns out not to be true, and you have no recourse, is that in your conception of things, ok? Because there’s a pandemic?”

O’Connor: “But Stephen, are we not slightly all giving up some of our rights at the…”

Kinsella: “I have no issue, I have no issue with being asked what my movements are, at this particular point in time. My reaction was in hearing a statement that you have to simply suspend human rights. I just think that that statement is far too far. And I don’t think the other speaker has defended that position in any way actually.”

The Garda Review would like to reiterate its unequivocal support for all human rights, for all citizens, at all times. However in times of great emergency such as now, the media debate should not be diverted from the core issue – which is to save lives. We salute our Frontline. pic.twitter.com/QGKFqpcvKY

Thanks to @RadioBrendanRTE for inviting me on. My tone was more aggressive than usual, apologies. I simply couldn’t let the statement around suspending human rights go unchallenged. #COVID19 is a crisis. We do what we must for each other. That doesn’t cost us our rights.

Previously: ‘They Falsified Them Under Pressure From Gardaí’