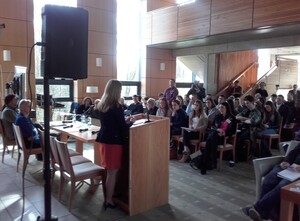 Gemma O’Doherty at the University of Limerick last week

The opening address at last week’s Journalism In Times Of Crisis conference at the University of Limerick was given by Gemma O’Doherty.

Gemma was fired from the Irish Independent while investigating the quashing of then Garda Commissioner Martin Callinan’s penalty points.

“I’d like to thank Henry Silke and University of Limerick for organising and hosting this important conference. Reporters who work at the coalface of investigative journalism in Ireland need the support of our colleagues in academia, especially when it is so lacking within the media itself.

These are very difficult times for journalism in Ireland.

Those of us who investigate corruption in public office make ourselves and our sources extremely vulnerable to those in power who would intimidate us, monitor our activities, threaten our safety and try to silence us.

In return, we receive almost no support.

We work in an era where a culture of fear and timidity stalks many of our newsrooms. It has bred a generation of journalists who behave less like dogged agents of the public interest and more like compliant diplomats and spin doctors constantly looking over their shoulders and towing the party line.

They have forgotten or chose to ignore the true function of our still noble vocation: to hold power to account, to comfort the afflicted and afflict the comfortable, to defend the public’s right to know, to seek the truth and report it.

In this new media landscape where many Irish journalists can no longer do their job without fear or favour, the greatest loser is democracy. A robust, independent, adversarial press is the lifeblood of a functioning democracy and a free society.

In Ireland in 2016, we have nothing close to that.

When Enda Kenny came to power in 2011, he promised a new era of integrity, accountability and transparency. But as a journalist, when you ask questions of a state press office, you hit a brick wall, more often than not.

I would argue that press freedom and the ability of the media to hold power to account is more compromised today than at any other time in the history of the state.

This has no doubt contributed significantly to the crises we have in policing, health, housing and water services.

This new era of cowering journalism has come about largely, but not only, because so much of the media has been allowed to fall into the hands of so few.

The fact that many of us now refer to the biggest owner of Irish media as ‘Redacted’ speaks volumes. One big voice has far too much power and prominence in our small country.

Not all media moguls exert the chilling effect that some do over their newsrooms. I spent most of my 17-year career at INM working for Tony O’Reilly. He invested in decent journalism and good writers. He understood newspapers, and while he was not perfect, by and large he left editors to get on with it.

And then there is Denis O’Brien.

Denis O’Brien, who attempted to bring in a so-called journalists’ charter that challenged the right and duty of reporters to engage in adversarial journalism.

Denis O’Brien who was reported to the United Nations for making legal threats against journalists.

Denis O’Brien who last year managed to silence most of the Irish media from reporting a speech in our parliament.

Denis O’Brien who threatened to sue a website whose sole purpose is to engage in satire, that most precious form of free speech.

Is it healthy for democracy that someone who takes such an interest in silencing our right to speak be in control of so much of our media? I don’t think so.

I don’t make any distinction any longer between RTÉ and the O’Brien-owned media. If anything, I would hold more disdain for the state broadcaster because it is failing its public service remit so blatantly and really does deserve the name it is more commonly known as on social media: ‘RTEBIAS’.

It seems to disregard the fact that it is accountable to the public who pays so that it may exist.

There are so many examples of this, it has almost become the rule rather than the exception.

We saw it in its often farcical coverage of the general election which undoubtedly affected the final poll; in its bizarre reporting of the Mairia Cahill case, Slab Murphy and the Special Criminal Court; in its failure to cover allegations about Finance Minister Michael Noonan and his role in the foster care scandal; in its refusal to cover cases of gross corruption in our garda force including the cover-up of children’s murders.

There is no doubt that a culture of institutionalised complacency now dominates RTÉ where some presenters earn more than David Cameron and Barack Obama, and certain journalists see themselves as celebrities, appearing on the cover of Hello-style magazines and red carpets in designer dresses.

When they are not interviewing each other, they’re rolling out the same clique of voices and seeking to rehabilitate people who’ve been disgraced in the public eye.

At the time of my firing, I was immersed in many stories about corruption and wrongdoing in the criminal justice system. I was working with bereaved families whose loved ones had been killed in violent circumstances.

These families were alleging grave wrongdoing in the gardai but when they approached certain journalists in establishment outlets, they said their cases were not being taken on board and they got the cold shoulder.

In most cases, their stories were compelling but the families were left with a sense of abandonment that the very people who should have given them support failed them.

In doing so, they also failed the public interest.

One of the cases I’m investigating is that of Mary Boyle.

Ireland’s youngest and longest missing person was six when she was murdered during a visit to her grandparents’ remote farm in Donegal in 1977.

The authorities have failed to bring the chief suspect to justice amid allegations of garda corruption and political interference in the case.

In March, her twin sister Ann and I visited the US Congress to lobby for justice for her as that door has been firmly shut here.

Despite countless requests to RTÉ to cover this important visit, they refused to inform the public about it over the airwaves.

Was this out of fear that it might bring the Phoenix Park into disrepute and shine a light on corruption in the gardai? One has to wonder.

So what is the effect of an obedient, cowardly media on society?

Joseph Pulitzer once said that a cynical, mercenary press would in time produce a people as base at itself.

There has certainly been an attempt by some segments of the media to dumb down the population, and when citizens start to challenge authority and engage in dissent, they refuse to report those challenges fairly.

A vivid example of that has been the bizarre coverage of the Irish Water movement and the so-called ‘sinister fringe’.

[This] week, a journalism conference in Kerry will be opened by Noirin O’Sullivan who has presided over a litany of scandals in her time as Garda Commissioner. Joan Burton and Frances Fitzgerald are among the other speakers. That really says it all.

We need to smash the cosy cartel that exists between the press, power and the police in this country because it is so damaging to the public good.

I would like to mention some notable exceptions in the Irish media who do try to prioritise the interests of democracy in their journalism: The Sunday Times,  Irish Examiner, Irish Daily Mail and Irish Times, and, of course Broadsheet and Phoenix.

But trust in media is understandably on the wane because the public know that so many of the issues that matter most to them are being skewed or ignored.

However, there is a bright side to all of this. This is a very exciting time to be a journalist.

As many traditional newsrooms become more focused on protecting plummeting revenues and their friends in power, investigative journalists are finding new ways to tell stories and release information and high quality content into the public domain by cutting out the middle man.

The internet has been our greatest resource in this regard.

In my own area – corruption in the criminal justice system – we have seen how documentaries like ‘Making A Murderer’ can have such a huge impact and do a lot of public good in the process.

Publicly-funded investigative websites are beginning to challenge old media where editors hold off running stories for fear of upsetting the establishment and denying the public their right to know.

Here in Ireland, a team of our finest investigative reporters have set up a new website called Righttoknow.ie to push for transparency and accountability in public life.

We must embrace this change and realise it is for the betterment of our profession and society.

But we also need to start looking at our media colleagues and asking how the journalists of the future will protect the public interest. Will they be boat-rockers who challenge authority and dig until they get answers? Will they have the tenacious rat-like cunning that proper editors once demanded of their reporters? Will they chase yarns as if their lives depended on it?

Hopefully all of the above but it is the job of our universities to nurture those characteristics in them.

I’ll finish with the words of Joe Mathews, a former reporter with the LA Times, when he spoke about how the public interest was so endangered by the crisis in journalism.

‘Much of the carnage of the ongoing media industry cannot be measured or seen. Corruption undiscovered. Events not witnessed. Tips about problems that never reach anyone’s ears because the ears have left the newsroom. With fewer watchdogs, you get less barking. How can we know what we will never know?’

Our profession is on its knees, but it is worth fighting for. We have a duty to fight for it. We need to stand up for courageous journalism whose primary focus is the public interest.

We need to read it, to buy it, to support it, because without it, the health of our democracy will remain in terminal decline.”

Women in media conference (sponsored by The Irish Times, April 15 – 17)