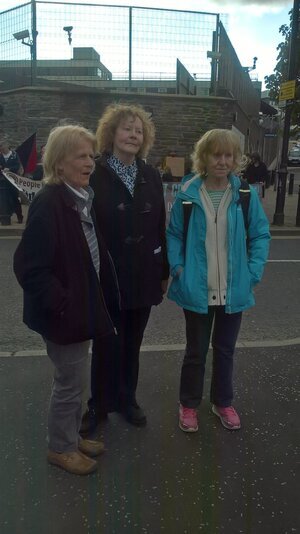 Three women [Collette Devlin, Diana King and Kitty O’Kane] have handed themselves into a police station in Derry, stating they have procured and taken illegal abortion pills and requesting that they be prosecuted, in protest at Northern Ireland’s restrictive abortion laws.

…The women hope to trigger a trial to showcase the archaic nature of the 1861 Offences Against the Person Act – the legislation which makes abortion in Northern Ireland illegal except in extremely rare circumstances.

King, 72, a retired social worker, said she felt compelled to make a stand…  “It is unforgivable how women are being treated. I am handing myself in to the police to inform them that I have procured the nine-week abortion pills on several occasions,” she said before making her way to the police station.

…The three women put themselves forward ahead of younger women, because they no longer have jobs that might be affected by a criminal record.