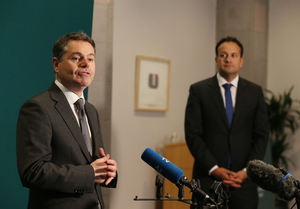 The government has ‘annuled’ Sinn Féin’s motion of no-confidence in Leo Varadkar called after it emerged the Tanaiste leaked documents relating to an Irish Medical Organisation pay deal to a rival union the National Association of General Practitioners (NAGP).

Minister for Finance Paschal Donohoe said TDs would view the issue “in the round” and accept that it was a single error made by the Tánaiste.

Mr Donohoe said Government TDs and those who work with the Tánaiste accept two things.

“The first thing they accept is that the way in which this particular matter was handled fell short of the standards that Leo Varadkar has for himself.

“But the second thing I think they accept is that Leo has demonstrated the highest standards in his time in public office on the management and leadership of a whole array of masters for our country.”