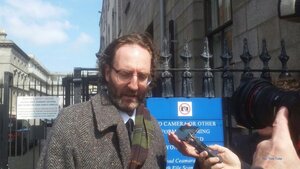 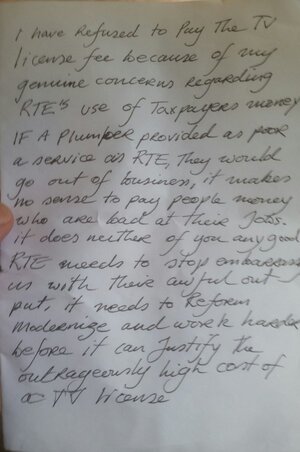 Comedian David McSavage outside court this morning and his handwritten statement

Further to comedian David McSavage saying he wouldn’t pay for a TV licence because of his dislike for RTÉ’s taste in humour, he appeared in court earlier today.

A TV licence inspector told Judge O’Neill that he called to the entertainer’s [David McSavage’s] home on May 7 last and McSavage confirmed he lived there and was in possession of a television set but had no licence.

However, a licence was taken out on March 31 this year leaving arrears of €115, the inspector told the court.

…Judge O’Neill adjourned the case until June 16 and told him that if the arrears were paid by then he will not have to attend the hearing and the case will be struck out.

After court McSavage told reporters he has not bought a licence and he did not know who had got it for him.

Previously: ‘The Rubberbandits Are Now As Mainstream As Ryan Tubridy’ 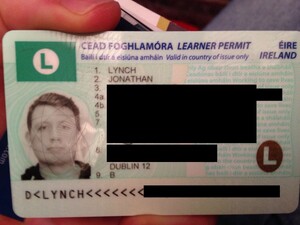