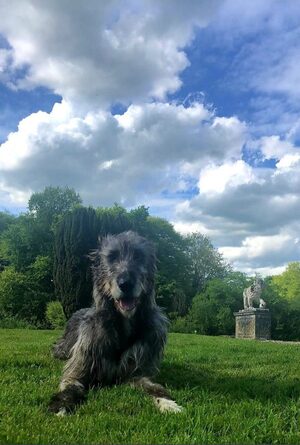 Your pet in lockdown to broadsheet@broadsheet.ie marked ‘My Pet in Lockdown’ 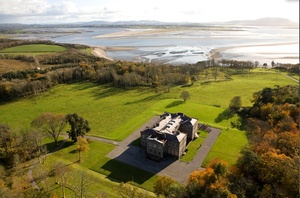 The Supreme Court yesterday overturned a High Court decision to allow the public to access a right of way in the grounds of Lissadell House, Co Sligo (above).

But what’s it really all about?

Broadsheet: “Legal Coffee Drinker. What’s it really all about?”

Legal Coffee Drinker: ” A narrow, heavily potholed track through the Lissadell estate. The question was whether or not the public was entitled to access this track without the consent of the owners of Lissadell on the basis that it was a public right of way.

Broadsheet: “And were they?”

Legal Coffee Drinker: “They were not. Well, not most of it. A small portion of the track was a public right of way, but most of it wasn’t.”

Broadsheet: “How could it be so difficult to find this out?”

Legal Coffee Drinker: “Two things are needed for a public right of way to arise. Firstly, the way needs to be dedicated by its owner to the public. Secondly, the public has to accept this dedication. Acceptance by the public is pretty easy to prove – just show the public has been using the right of way. The difficulty is in showing dedication by the owner. Dedication can be either express – in a deed – or inferred from the conduct of the owner.
“In this case, there was no express dedication and the question was whether or not the conduct of the Gore-Booths – and in particular Sir Josslyn Gore-Booth – during the period of his ownership of the property was something from which an intention to dedicate could be inferred.
“Put another way, would a reasonable man (or person, if you prefer) regard Sir Joss having acted as if the right of way belonged to the public? Because that’s what’s required for a right of way to arise in the absence of express grant.”

Broadsheet: “Where was the problem?”

Legal Coffee Drinker: “In 1993 Sir Josslyn’s agent put up a concrete structure obstructing access along the right of way – apparently to keep out New Age travellers. The obstruction was removed by members of the public. The High Court judge (McMahon J) focused on the fact that no objection was made by Sir Joss to its removal and said this showed that he regarded the right of way as belonging to the public.The Supreme Court took a different view.
“They said that the fact Sir Joss put up a barrier in 1993 showed that he felt he was the person entitled to the road and that he only put up with its removal in the interest of neighbourly good relations; not because he felt that the road was or should be a public right of way. The characterisation of the ‘1993 incident’ was a key difference between the two courts.
“So determining the existence of a public right of way, where there’s no express dedication, involves going back in time and trying to work out, from his outward conduct, what was going on in the head of the owner at the time? A very impractical way of sorting out legal rights.”

Broadsheet: “There must be a simpler way, surely?”

Legal Coffee Drinker: “One option would be to make the right of way dependent on proof of free and open user by the public for a fixed period of time, irrespective of the intentions of the owner. At least this would simplify what had to be proved – although it would also make landowners a lot more reluctant to allow the public onto their land.
“Sadly, the much-vaunted Land and Conveyancing (Law Reform) Act 2009, which purports to reform and update Irish land law, fails to deal at all with the archaic and difficult-to-apply rules of public rights of way. An unfortunate omission, and one for which somebody is going to end up paying the price in terms of legal costs (yet to be decided). A lot of time and expense over a bit of old lane! [shakes head wearily, drains coffee]. It’s a nicely written judgment, though – quite readable, and – like all Supreme Court judgments (see below), freely available to members of the public, lawyers and non-lawyers alike.”

Previously: “Costs Are Estimated At €7 Million”

Home of the Gore-Booths and Summer bolt-hole for WB Yeats.

In 2010, The High Court ruled that a public right of way existed across the grounds following a case between the owners (barristers Constance Cassidy and Edward Walsh) and Sligo County Council that lasted 58 days and cost up to €6m.

Massively expensive court case, fraught with disagreements, locals not speaking to each other, protests, all of it.
Well.
Take a look at the famous Right of Way now. This is what the County Council fought so hard for, and spent so much money protecting. I’m afraid these photos don’t really do them justice: these potholes are massive. (cont. below) 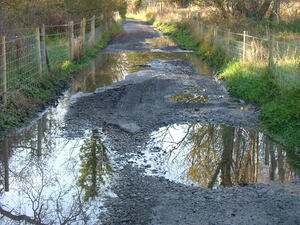 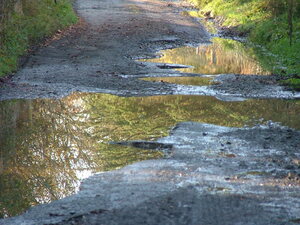 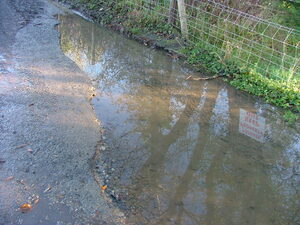 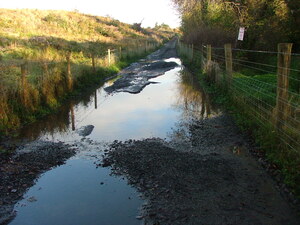 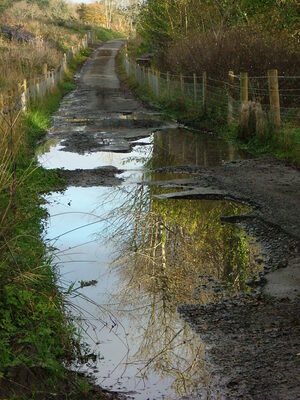 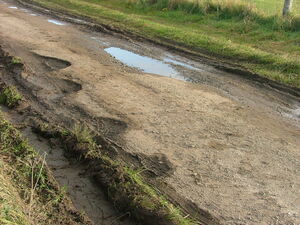 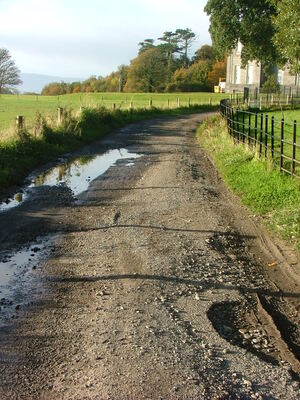 Some of the them are ankle deep (knee deep if you’re a leprechaun) and full of water so if you drive at any speed at all that’s your sub frame gone.
Tried to drive in normal car. Took me around 15 minutes to get 150 yards.
Unfortunate tourist in a large Campervan found himself having to reverse the entire way back because the fencing is so close to the road there is nowhere to turn.
Camber on road is very high as well which makes you suddenly feel very sentimental about your exhaust. Mother Nature 1 Barristers 0